On Language: Chomsky's Classic Works Language and Responsibility and Reflections on Language in One Volume (Paperback) 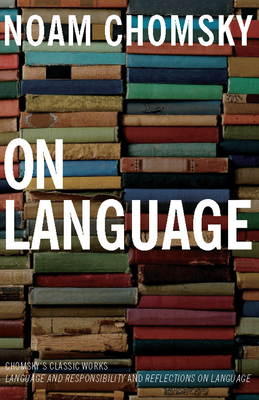 On Language: Chomsky's Classic Works Language and Responsibility and Reflections on Language in One Volume (Paperback)

Described by the New York Times as "arguably the most important intellectual alive," Noam Chomsky is known throughout the world for his highly influential writings on language and politics. Featuring two of Chomsky's most popular and enduring books in one omnibus volume, On Language contains some of the noted linguist and political critic's most informal and accessible work to date, making it an ideal introduction to his thought.

In Part I, Language and Responsibility (1979), Chomsky presents a fascinating self-portrait of his political, moral, and linguistic thinking through a series of interviews with Mitsou Ronat, the noted French linguist. In Part II, Reflections on Language (1975), Chomsky explores the more general implications of the study of language and offers incisive analyses of the controversies among psychologists, philosophers, and linguists over fundamental questions of language.

Noam Chomsky is the Institute Professor and a professor of linguistics, emeritus, at the Massachusetts Institute of Technology. A world-renowned linguist and political activist, he is the author of numerous books, including On Language: Chomsky's Classic Works Language and Responsibility and Reflections on Language; Understanding Power: The Indispensable Chomsky, edited by Peter R. Mitchell and John Schoeffel; American Power and the New Mandarins; For Reasons of State; Problems of Knowledge and Freedom; Objectivity and Liberal Scholarship; Towards a New Cold War: U.S. Foreign Policy from Vietnam to Reagan; The Essential Chomsky, edited by Anthony Arnove; and On Anarchism, and a co-author (with Ira Katznelson, R.C. Lewontin, David Montgomery, Laura Nader, Richard Ohmann, Ray Siever, Immanuel Wallerstein, and Howard Zinn) of The Cold War and the University: Toward an Intellectual History of the Postwar Years and (with Michel Foucault) of The Chomsky-Foucault Debate, all published by The New Press. He lives in Lexington, Massachusetts.