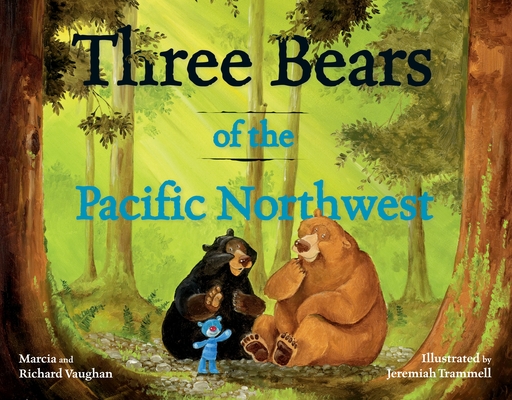 
Special Order—Subject to Availability
When a small blue teddy bear falls out of a moving recreational vehicle in the mountains of the Pacific Northwest, two native bears-Black Bear and Brown Bear-agree to help reunite Blue Bear with his family.

The bears only know that Blue Bear's boy lives in a "shiny silver box with wheels." Down the mountains, through the forests, and across the saltwater, the three bears encounter eagles, seals, skunks, and many other Pacific Northwest animals along their way. This is a charming story with a happy ending and no Goldilocks. The book features Jeremiah Trammel's beautiful oil-painted illustrations, which are sure to engage children and parents alike.
Marcia Crews has written more than 100 children’s books in Australia and the United States. She lives in Tacoma, WA.

Richard Vaughan is the author of more than 20 children’s books, including Eagle Boy. He lives in San Marcos, CA.

Jeremiah Trammell is an illustrator whose work has appeared in over five children's books, including The Giant Cabbage. He lives in Seattle.
With fun illustrations and a sweet story by Northwest author pair Marcia and Richard Vaughan and Seattle illustrator Jeremiah Trammell, this book about adventure, friendship and the love of a favorite toy will certainly have your kids requesting a second read AND a camping trip!
Red Tricycle

There is no Goldilocks in the charming children’s book "Three Bears of the Pacific Northwest," but there is a grand tour through the Cascade Mountains and across the Salish Sea. The story follows Black Bear and Brown Bear as they help Blue Bear (a stuffed toy) find the little boy who owns him after he gets lost. The book — written by Marcia and Richard Vaughan, of Vashon, and illustrated by Seattle artist Jeremiah Trammell — teaches kids about Northwest flora and fauna as the bears search for the little boy.
The Seattle Times

"Three Bears of the Pacific Northwest," by Washington authors Marcia and Richard Vaughan, is a lush look at the animals and wildernesses of the Northwest that will entrance most children... The book is aimed at ages 4 to 8, but Mom and Dad may be tempted to sneak an extra peek after bedtime just to savor the pictures, especially if they've spent time in similar places.
The Oregonian

Begin a picture book with the words "High in the Cascade Mountains" and get on our good side. The engaging adventure tale features two real Northwest bears who help find the boy belonging to a small blue teddy who's fallen out of a trailer. The Vaughans of Vashon Island also deliver solid information about regional flora and fauna. Seattle resident Trammell paints an evocative picture of the Northwest.
Tacoma News Tribune