Echoes of Oklahoma Sooners Football: The Greatest Stories Ever Told (Echoes of…) (Hardcover) 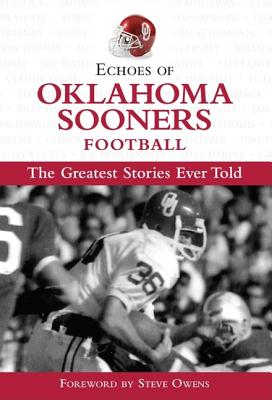 Echoes of Oklahoma Sooners Football: The Greatest Stories Ever Told (Echoes of…) (Hardcover)


Special Order—Subject to Availability
With a proud tradition dating back to 1895, a worldwide following of rabid, devoted fans, and an ever-growing list of national championships, Oklahoma Sooners football is one of the most elite programs in collegiate sports. Throughout the years, the players who have worn the familiar red helmet and jerseys, the coaches who have led them into battle, and the games in which they participated have shaped the sport that millions of fans enjoy today. Oklahoma won its first conference championship in 1915 and nabbed its 40th and most recent one in 2006 on its way to yet another BCS bowl game. The Sooners have won seven national championships—1950, 1953, and 1956 under the legendary Bud Wilkinson, 1974, 1975, and 1985 under Barry Switzer, and 2000 under current coach Bob Stoops—who has a career won-lost record of 86-19. The list of great players who have played for Oklahoma is long and storied, and includes Heisman Trophy winners Billy Vessels, Steve Owens, Billy Sims, and Jason White. Other OU greats include Claude Reeds, Jack Mitchell, Jack Mildren, Greg Pruitt, Thomas Lott, Brian Bosworth, and Adrian Peterson. These coaches, players and most memorable moments in Oklahoma history have been colorfully documented by sportswriters around the United States for almost a century. Echoes of Oklahoma Sooners Football is a nostalgic compilation of feature articles, profiles, games stories, and other examples of the best sportswriting ever devoted to the Sooners.
Triumph Books is a leader in quality and innovation in sports publishing. In 2000, Triumph Books launched Triumph Books Entertainment, a specialty pop culture and current events imprint. Steve Owens is a former football player for the University of Oklahoma and a former running back in the NFL. He is the recipient of the 1969 Heisman Trophy and is an All-American honoree.