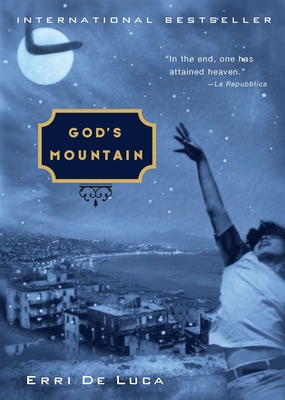 
Special Order—Subject to Availability
This is a story told by a boy in his thirteenth year, recorded in his secret diary. His life is about to change; his world, about to open.

He lives in Montedidio—God’s Mountain—a cluster of alleys in the heart of Naples. He brings a paycheck home every Saturday from Mast’Errico’s carpentry workshop where he sweeps the floor. He is on his way to becoming a man—his boy’s voice is abandoning him. His wooden boomerang is neither toy nor tool, but something in between. Then there is Maria, the thirteen-year-old girl who lives above him and, like so many girls, is wiser than he.  She carries the burden of a secret life herself. She’ll speak to him for the first time this summer. There is also his friendship with a cobbler named Rafaniello, a Jewish refugee who has escaped the horrors of the Holocaust, who has no idea how long he’s been on this earth, and who is said to sprout wings for a blessed few.

It is 1963, a young man’s summer of discovery. A time for a boy with innocent hands and a pure heart to look beyond the ordinary in everyday things to see the far-reaching landscape, and all of its possibilities, from a rooftop terrace on God’s Mountain.

Erri De Luca was born in Naples in 1950. He is a columnist for Il Manifesto and a novelist whose work has been translated into seven languages. He lives outside of Rome.
“This small novella speaks of the most common of men, the most marginal of lives, and yet becomes an echo and a reflection of the most important of all books.”—La Stampa

“De Luca's prose is rich, succulent, full of life: one can almost taste it as a ripe fruit in the mouth. The tale captures its readers, and immerses them in a magical atmosphere.”

“The language of De Luca’s narrator is extraordinary, capable of recounting the most cruel tragedies, the most complicated thoughts, the most profound feelings, using the simplest of our daily expressions, yet avoiding easy sentimentalism.”—L'Unita'

“Once the book is closed, the indelible impression is that one has just listened to a sacred hymn…And in the end, one has attained heaven.”—La Repubblica