Black Like Us: A Century of Lesbian, Gay, and Bisexual African American Fiction (Paperback) 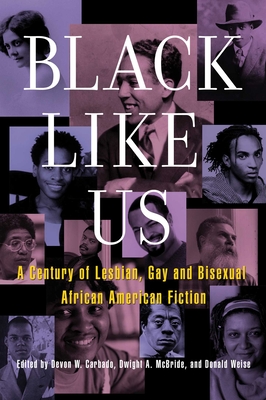 Black Like Us: A Century of Lesbian, Gay, and Bisexual African American Fiction (Paperback)

Winner of the 2003 Lambda Literary Award for Fiction Anthology

Showcasing the work of literary giants like Langston Hughes, James Baldwin, Audre Lorde, Alice Walker, and writers whom readers may be surprised to learn were "in the life," Black Like Us is the most comprehensive collection of fiction by African American lesbian, gay, and bisexual writers ever published. From the Harlem Renaissance to the Great Migration of the Depression era, from the postwar civil rights, feminist, and gay liberation movements, to the unabashedly complex sexual explorations of the present day, Black Like Us accomplishes a sweeping survey of 20th century literature.

Devon W. Carbado is a professor of law and African American studies at UCLA. He is the editor of "Black Men on Race, Gender and Sexuality" and coedtior of the Lambda Literary Award finalist "Black Like Us: A Century of Lesbian, Gay, and Bisexual African American Fiction," which was also nominated for a 2003 ALA Award. He lives in Los Angeles.

"This rich anthology will take your breath away." --The Advocate

"This enormously powerful and expansive book covers the eras from 1900 to 2000 in dozens of entries that showcase writers who are household names, and others who aren't, as America experienced sea changes around gender, race, and sexual orientation." --The Urban News

"Black Like Us unlocks the closet of black lesbian, gay, and bisexual writing." --Keith Boykin, author of One More River to Cross

"Black Like Us thoughtfully shapes and lovingly nurtures a literary tradition that has been marginalized for too long. An absorbing and enlightening encounter with compelling American literature." --John D'Emilio, author of Lost Prophet: The Life and Times of Bayard Rustin

"An exceptionally fine read and a rich resource for all of us." --Robert L. Allen, co-editor of Brotherman: The Odyssey of Black Men in America

"Black Like Us refuses to separate the histories and imaginations of Black America and Queer America. In so doing, it becomes a model for a more insightful and useful cultural discussion, one that has importance for all of American culture." --Joan Nestle, co-founder of the Lesbian Herstory Archives, author of A Restricted Country and A Fragile Union