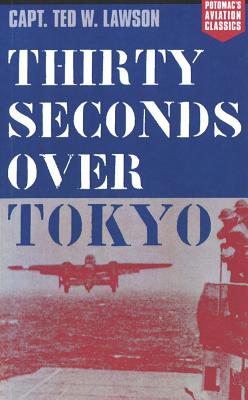 
Not On Our Shelves—Ships in 1-5 Days
Ted W. Lawson’s classic Thirty Seconds Over Tokyo appears in an enhanced reprint edition on the sixtieth anniversary of the Doolittle Raid on Japan. “One of the worst feelings about that time,” Ted W. Lawson writes, “was that there was no tangible enemy. It was like being slugged with a single punch in a dark room, and having no way of knowing where to slug back.” He added, “And, too, there was a helpless, filled-up, want-to-do-something feeling that [the Japanese] weren’t coming—that we’d have to go all the way over there to punch back and get even.” Lawson gives a vivid eyewitness account of the unorthodox assignment that eighty five intrepid volunteer airmen—the “Tokyo Raiders”—under the command of celebrated flier James H. Doolittle executed in April 1942. The plan called for sixteen B-25 twin-engine medium bombers of the Army Air Corps to take off from the aircraft carrier Hornet, bomb industrial targets in Japan, and land at airfields in China. While the raid came off flawlessly, completely surprising the enemy, a shortage of fuel caused by an early departure, bad weather, and darkness took a heavy toll of the raiders. For many, the escape from China proved a greater ordeal. Peter B. Mersky provides new information on the genesis of the raid, places it in the context of the early operations against Japan, and updates Ted Lawson’s biography.
Purchase the audio edition.
Peter Mersky is a series co-editor for Potomac Books' Aviation Classics and the editor of From the Flight Deck: An Anthology of the Best Writing on Carrier Warfare (Brassey's, Inc., 2003). He lives in Alexandria, Virginia.