Aviation's Most Wanted: The Top 10 Book of Winged Wonders, Lucky Landings, and Other Aerial Oddities (Most Wanted™) (Paperback) 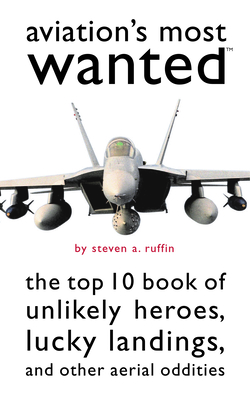 Aviation's Most Wanted: The Top 10 Book of Winged Wonders, Lucky Landings, and Other Aerial Oddities (Most Wanted™) (Paperback)

By Steven A. Ruffin


Not On Our Shelves—Ships in 1-5 Days
Ever since the caveman gazed longingly at the winged creatures above him, mankind has been enamored with the idea of flight—of just taking off and soaring away. Steven A. Ruffin celebrates that spirit, that sense of wonder, with Aviation’s Most Wanted™: The Top 10 Book of Winged Wonders, Lucky Landings, and Other Aerial Oddities. With dozens of top-ten lists focusing on notable flights, memorable planes, famous and infamous aviators, aircraft combat, air travel—even space travel—and so much more, Ruffin provides a treasure trove of fun facts and amazing anecdotes celebrating the world’s love affair with flight, plus the hurt that accompanies any deep love. Will Rogers died in a plane crash near Point Barrow, Alaska, with aviation legend Wiley Post at the controls. Rogers was writing an article at the time of the crash; eerily, the last word he typed was “death.” Isoroku Yamamoto, who masterminded the surprise attack on Pearl Harbor, met his fate in similarly sneaky fashion. U.S. forces intercepted and decoded information on Yamamoto’s travel plans and “Pearl Harbored” his plane, shooting it down into the island jungle of Bougainville. The safest seat in a crash depends on if you crash on takeoff or on landing—so flip a coin! You’ll read about the first and worst of flight, aces and races, and everything from crimes, sex, and controversy to planes so fast they can outrun the sun. With Aviation’s Most Wanted™ you’ll get the history of flight from the early balloon adventures of the eighteenth century until the present, laid out with trivia and tales to amuse and amaze!
Steve A. Ruffin is an aviation writer and pilot with a lifelong interest in aviation history. He served for four years as Managing Editor of the World War I aviation journal 'Over the Front' and is an eight-time winner of the League of World War I Aviation Historians' Hooper Award for writing and editorial excellence.