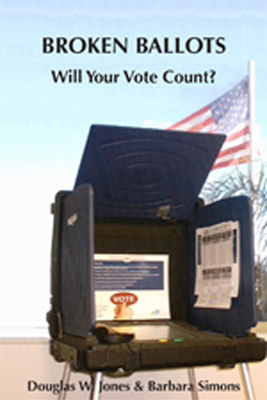 For many of us, the presidential election of 2000 was a wake-up call. The controversy following the vote count led to demands for election reform. But the new voting systems that were subsequently introduced to the market have serious security flaws, and many are confusing and difficult to use. Moreover, legislation has not kept up with the constantly evolving voting technology, leaving little to no legal recourse when votes are improperly counted. How did we come to acquire the complex technology we now depend on to count votes?  Douglas Jones and Barbara Simons probe this question, along with public policy and regulatory issues raised by our voting technologies.  Broken Ballots is a thorough and incisive analysis of the current voting climate that approaches American elections from technological, legal, and historical perspectives.  The authors examine the ways in which Americans vote today, gauging how inaccurate, unreliable, and insecure our voting systems are. An important book for election administrators, political scientists, and students of government and technology policy, Broken Ballots is also a vital tool for any voting American.

Douglas W. Jones is on the computer science faculty at the University of Iowa.
“Broken Ballots is an extremely useful book on an extraordinarily important subject: will your vote count? As this book convincingly shows, the combination of defective technology and poor regulation have too often meant that votes are miscounted, or not counted at all. The book provides a comprehensive history of the use of voting technology in the United States, but its heart is the ‘voting technology battles’ that followed the 2000 election. That election, as the authors note, demonstrated more dramatically than any other the impact that flawed technology can have on election outcomes. Simons and Jones were not mere spectators to these battles, they have been important players. They make no apologies for their opposition to paperless computerized voting machines, or to internet voting. While not everyone will agree with their characterization of all the battles of the last decade, they provide a cogent and clear critique of current election administration and regulation, and offer several common sense solutions for increasing the accuracy and fairness of our elections. This book is a must read, not only for election officials and other policy makers, but also for public interest groups who seek to protect the vote and, indeed, for every citizen who wants his or her vote to be counted.”
— Frederick A. O. “Fritz” Schwarz, Jr., chief counsel, Brennan Center for Justice at the New York University School of Law

“Thanks so much for writing [Broken Ballots]—it’s a great comprehensive review of voting systems. I’ve been interested in the technology behind this basically since college and especially after I learned more about cryptography after graduating.”
— Bill Lynch, cofounder of Jive Software

“The cornerstone of our democracy is the right to vote and the right to have that vote counted as it was intended. Broken Ballots first demonstrates clearly and compellingly the extent to which that right is in jeopardy. Then it lays out a plan to preserve and protect that right. Kudos to the authors and to all those fighting to safeguard our democracy.”
— Kevin Shelley, former California Secretary of State

“Americans want to believe their votes are counted reliably, fairly, and fully, yet they have a nagging suspicion that all is not well in our country’s voting systems. Broken Ballots chronicles in the greatest detail how these suspicions have been examined and how improvements have been pursued, rejected, implemented, or defeated. Jones and Simons detail the intricacies involved in maintaining the integrity of voting procedures and technologies and in protecting the outcome of elections from error or manipulation. Presenting evidence that ballot box access and security are under serious threat by the push for unauditable voting machines and untested and unsecured internet-based voting, Broken Ballots forces us to examine closely our electoral process. As a nation, we must take a serious look at the suggestions provided by Jones and Simons and enact the legislation needed to make strides toward secure, accessible, and verifiable elections. What can be more important?”
— Rush Holt, former New Jersey congressman, CEO of the American Association for the Advancement of Science

“Broken Ballots is the definitive source of information about voting technology, past and present. But it is not purely focused on technology issues; it also thoroughly examines the policy issues surrounding the use of various voting technology. Most importantly, it documents the history of how these issues have been dealt over the centuries. The authors were directly involved in making some of that history in the last decade. This recent history is a particularly fascinating case study of many aspects of the making of policy about the use of technology, including the roles of business, election officials, politicians, activist, and technologists. It is not possible to understand elections without understanding the technology that makes them function (or malfunction). This book is essential reading for anyone who cares about elections.”
— David Dill, Stanford University

“Broken Ballots provides clear and definitive answers to the questions: ‘How did our voting systems get to be the way they are?’, ‘Are our voting systems secure?’ and ‘What can be done to improve the way we vote?’ Using examples from the earliest mechanical voting machines to today’s proposals for voting over the Internet, it provides numerous vivid illustrations of the risks of using complex technology to collect and count our votes. It covers not only technology, but also election law, government policy and regulation, accessibility of voting systems, and the history of voting machine companies in the United States.”
— Ronald L. Rivest, Massachusetts Institute of Technology and founder of RSA Security

“An important new book has just been published on the technology and policy of elections. Broken Ballots covers voting systems from the 19th century to the present, with particular focus on the last two decades. The authors describe the strengths and weaknesses of the machinery itself—lever machines, optical-scan vote counters, touchscreen voting computers—with technical sophistication, yet in a way that will be accessible to a wide audience. Then they describe the strengths and weaknesses of the policy processes—at the level of election administration, congressional legislation, and Federal administrative-branch agencies—with particular emphasis on the last 10 years. The authors are experts in the field of voting technology and policy, and it shows. The book is well researched with extensive citations, but it’s also a good read (with photos and illustrations) that has an interesting story to tell.”
— Andrew Appel, Princeton University

“In my opinion, it is the most thorough, well researched, and definitive publication on this subject that has ever been written—despite the reality that it was under perpetual gestation for many years, because the ground under our elections has continually shifted, although often not for the better. The commercial vendors undoubtedly will hate it, because it truly documents a reality in which the seams are unseemly, and the lack of accountability is almost unbelievable. But it is one of the most important books around for those who believe in democracy.”
— Peter G. Neumann, principal scientist, SRI International

“For almost a decade now a little-known but fierce policy debate has been going on in the U.S. over the role of computers and Internet technology in elections—the “voting technology wars”. Election officials, vendors, and various interest groups have pushed for hurried adoption of these technologies, initially to replace the punchcard systems that were at the center of the controversy in the Florida, 2000 election debacle, and more recently for various other cited reasons. Ironically the technology community that one would ordinarily expect to be leading the push for computerized and Internet voting has been arguing strenuously for limitations on the use of electronics and software in elections because of the severe security, reliability, and privacy dangers they pose. Computer security experts, more than anyone else, are keenly aware of the many ways they know of to rig or disrupt a computerized election, and they know how profoundly difficult the technical problems are that would have to be overcome before fully computerized elections can be safe. Broken Ballots tells the story of voting technology evolution over the last century, concentrating on the last decade. It is a fascinating, wonderfully readable, accessible, and accurate account of both the history of the controversies and the technical issues involved by two nationally prominent computer scientists who know the subject deeply and have been personally engaged in fighting for election integrity for many years. While there have been many articles and even a few books that have touched on the subject, no other work even comes close to capturing the full story as this one does. It is superb writing and superb scholarship and offers yet another case study of the limitations and unintended consequences of too much technology applied too fast.”
— David Jefferson, computer scientist, Center for Applied Scientific Computing, Lawrence Livermore National Laboratory

“The public remains dangerously unaware—in part because of the media’s refusal (again) to do its job—of the technological threats to honest elections. Read this book to understand the situation, and what we can do about it.”
— Dan Gillmor, author and former columnist for the “San Jose Mercury News”