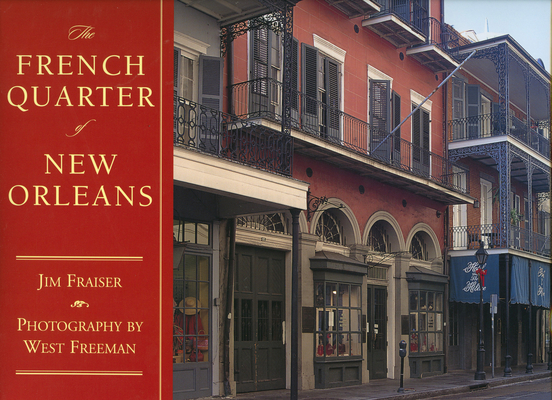 
Not On Our Shelves—Ships in 1-5 Days
There is no place in America like New Orleans's famed French Quarter. With photographs and history, The French Quarter of New Orleans explores the unique evolution of this district. The author and photographer team to reveal how war, fire, floods, politics, cultural conflict, and architectural innovation shaped the Quarter. In West Freeman's 160 color photographs the present-day romance of the Vieux Carr is here to savor. But The French Quarter of New Orleans moves beyond the Old World fa ades and into the heart and history of the many peoples--Spanish, French, Creole, Native American, African American, and Italians--who have lived here. From humble, wooden French cottages to stately, brick Spanish Colonial mansions, from Madame John's Legacy to the St. Louis Cathedral, the Quarter's architecture enthralls, and Jim Fraiser's text creates an anecdotal walking tour of memorable and storied sites. Studying buildings, Fraiser points out the struggle between native Creoles and newcomers in the replacement of Creole townhouses and cottages with "shotgun houses" and American Greek Revival homes. Freeman's photographs and Fraiser's text detail the historical significance and architectural styles of over one hundred structures. The history of the Quarter teems with vagabonds and saints, warriors and playwrights, musicians, and politicians. Fraiser animates the fascinating story with such evocative figures as the pirate Jean Lafitte, the conquering general Andrew Jackson, and the voodoo queen Marie Laveau. Riverboat gamblers, ladies of the night, duelists, opera aficionados, plague victims, jazz musicians, charlatans, and Mardi Gras revelers populate the streets and edifices Fraiser describes. For those who have visited the Quarter, this book will be a treasured memento of the district's unparalleled romance and flavor.
Jim Fraiser is author of Mississippi River Country Tales and coauthor of The Majesty of the Mississippi Delta and The Garden District of New Orleans. West Freeman is a native of New Orleans. His photographic work has been featured in Architectural Digest and is in the permanent collection of the New Orleans Museum of Art. He is coauthor of The Majesty of the Mississippi Delta and The Garden District of New Orleans.