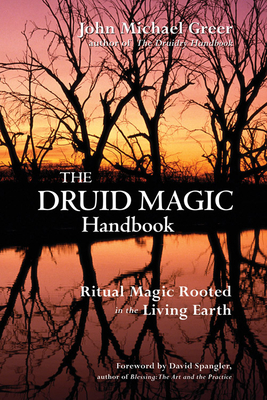 The first and only Druidic book of spells, rituals, and practice. The Druid Magic Handbook is the first manual of magical practice in Druidry, one of the fastest growing branches of the Pagan movement. The book breaks new ground, teaching Druids how to practice ritual magic for practical and spiritual goals within their own tradition. What sets The Druid Magic Handbook apart is that it does not require the reader to use a particular pantheon or set of symbols. Although it presents one drawn from Welsh Druid tradition, it also shows the reader how to adapt rites and other practices to fit the deities and symbols most meaningful to them. This cutting edge system of ritual magic can be used by Druids, Pagans, Christians, and Thelemites alike!

The first manual of Druidic magical practice ever, replete with spell work and rituals.
John Michael Greer is a highly respected authority on all aspects of Paganism.

John Michael Greer has been a student of the occult traditions and nature spirituality for more than twentyfive years. He is the author of numerous articles and more than ten books including Natural Magic, The New Encyclopedia of the Occult, The Druidry Handbook, and The Druid Magic Handbook. He is also the coauthor of Learning Ritual Magic and Pagan Prayer Beads. He lives in Ashland, Oregon with his wife Sara.
Since returning to the United States from Findhorn in the early seventies, David Spangler has continued to travel and lecture widely. He has developed and taught classes at a number of institutions, including the University of Wisconsin, Seattle University, and the California Institute of Integral Studies. He also teaches classes for the Lorian Association for Incarnational Spirituality. Read David Spangler's blog at www.Hermeticist@blogspot.com.