NEW YORK TIMES COMPLETE WORLD WAR II: All the Coverage from the Battlefields and the Home Front (Hardcover) 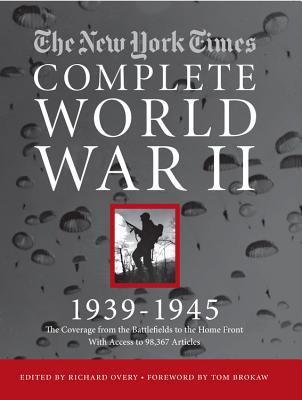 NEW YORK TIMES COMPLETE WORLD WAR II: All the Coverage from the Battlefields and the Home Front (Hardcover)


Special Order—Subject to Availability
Experience the history, politics, and tragedy of World War II as you've never seen it before with original, often firsthand daily reportage of The New York Times, our country's newspaper of record.

The Times' complete coverage of World War II is now available for the first time in this unique package. Hundreds of the most riveting articles from the archives of the Times including firsthand accounts of major events and little-known anecdotes have been selected for inclusion in The New York Times: The Complete World War II. The book covers the biggest battles of the war, from the Battle of the Bulge to the Battle of Iwo Jima, as well as moving stories from the home front and profiles of noted leaders and heroes such as Winston Churchill and George Patton.

A respected World War II historian and writer, editor Richard Overy guides readers through the articles, putting the events into historical context. The enclosed DVD-ROM gives access to more day-by-day coverage of World War II in The New York Times -- from the invasion of Poland to V-J day with access to over 98,000 articles.

Beautifully designed and illustrated with hundreds of maps and historical photographs, it's the perfect gift for any war, politics, or history buff.
The New York Times is regarded as the world's preeminent newspaper. Its news coverage is known for its exceptional depth and breadth, with reporting bureaus throughout the United States and in twenty-six foreign countries. Winner of 112 Pulitzer Prizes, the Times has the largest circulation of any seven-day newspaper in the U.S.

Tom Brokaw is an American television journalist and author best known as the anchor and managing editor of NBC Nightly News from 1982 to 2004. He is the author of The Greatest Generation, A Long Way From Home, The Time of Our Lives and other books, and the recipient of numerous awards and honors. He is the only person to host all three major NBC News programs: The Today Show, NBC Nightly News, and, briefly, Meet the Press. He now serves as a Special Correspondent for NBC News and works on documentaries for other outlets.

Richard Overy is a British historian who has written extensively on the history of World War II and the Third Reich. In 2007 as the Times editor of Complete History of the World, he chose the fifty key dates of world history. He is a Fellow of the Royal Historical Society, the British Academy, and King's College. In 2001 he was awarded the Samuel Elliot Morison Prize of the Society for Military History for his contributions to the history of warfare. In 2004 he was appointed professor of history at the University of Exeter. He has written over 30 books on World War II, including Why the Allies Won and 1939: Countdown to War. His work on World War II has been praised as "highly effective (in) the ruthless dispelling of myths" (A.J.P. Taylor), "original and important" (New York Review of Books) and "at the cutting edge" (Times Literary Supplement.)

This is a book to lose yourself in, to witness the war transmuted into print for the masses of readers living through it and anxious to follow it's twists and turns. No less fascinating as a study of newspaper writing. Essential.