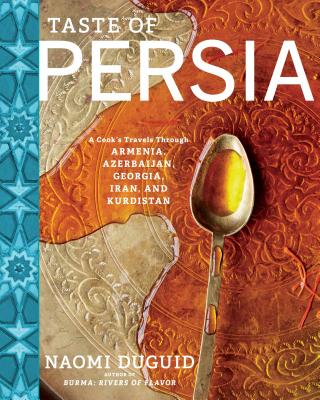 “A reason to celebrate . . . a fascinating culinary excursion.” —The New York Times

Though the countries in the Persian culinary region are home to diverse religions, cultures, languages, and politics, they are linked by beguiling food traditions and a love for the fresh and the tart. Color and spark come from ripe red pomegranates, golden saffron threads, and the fresh herbs served at every meal. Grilled kebabs, barbari breads, pilafs, and brightly colored condiments are everyday fare, as are rich soup-stews called ash and alluring sweets like rose water pudding and date-nut halvah.

Our ambassador to this tasty world is the incomparable Naomi Duguid, who for more than 20 years has been bringing us exceptional recipes and mesmerizing tales from regions seemingly beyond our reach. More than 125 recipes, framed with stories and photographs of people and places, introduce us to a culinary paradise where ancient legends and ruins rub shoulders with new beginnings—where a wealth of history and culinary traditions makes it a compelling place to read about for cooks and travelers and for anyone hankering to experience the food of a wider world.
Naomi Duguid is a writer, photographer, teacher, cook, and world traveler. Her most recent cookbook, Burma, brought news of a long-forgotten part of the world and won the 2013 IACP Cookbook Award for Culinary Travel and the Taste Canada Food Writing Award. Her previous award-winning titles, coauthored with Jeffrey Alford, include Flatbreads & Flavors: A Baker’s Atlas, their first book, which won a James Beard Award for Cookbook of the Year; Seductions of Rice; Hot Sour Salty Sweet, also a James Beard Cookbook of the Year; Mangoes & Curry Leaves; and Beyond the Great Wall.

Duguid’s articles and photographs appear regularly in Lucky Peach, Food & Wine, and other publications. She is a frequent guest speaker and presenter at food conferences. She is the host of Toronto’s Food on Film series and has a strong online presence (Twitter and Facebook). Her stock photo agency, Asia Access, is based in Toronto, where she lives when she is not on the road.
“For an introduction to Persian cuisine, pick up Naomi Duguid’s new cookbook. Through rich storytelling and recipes from her travels, Duguid explores the culinary heritage that unites Iran, Georgia, Armenia, Azerbaijan and Kurdistan.”
—Food Wine

“Brilliant. . . . One of the most excitingly accessible books of the season, combining nuanced diasporic traditions, straightforward recipes and easy-to-find ingredients.”
—USA Today

“In lieu of a Persian grandmother . . . any eager cook will be well-served by Naomi Duguid, the globe-trotting author of Taste of Persia. . . . Too many Persian cookbooks c an be overly technical; they miss the soul of the thing. With one foot in the old world and one in the new, Ms. Duguid does a beautiful job of translating complex concoctions into accurate, easy-to-follow recipes that reflect not just the flavors but the spirit of the countries that once made up the Persian Empire.
—The Wall Street Journal

“For years [Naomi Duguid] has been writing deep-dive books with a photographic National Geographic bent and recipes that work. Taste of Persia . . .  [is] particularly timely. Duguid captures dishes that reflect history and culture while being simply what’s on the table.”
—The Los Angeles Times, Our Favorite Cookbooks of Fall 2016

“While the recipes are appetizing and approachable, this book is about more than cooking—it’s about better understanding a region and its people. Now, more than ever, books like Duguid’s make for vital reading.”
—The San Francisco Chronicle, Our Favorite Cookbooks from 2016

“A fascinating culinary excursion. . . . Taste of Persia opens with a map, which illustrates Ms. Duguid’s wise observation that regional cooking doesn’t respect borders. So the search for Persian cuisine includes stops in Armenia, Azerbaijan, Georgia, Iran and Kurdistan. We are seduced from the start with the flavors of the region: saffron (most of the world’s supply comes from this part of the world), mint, dill, parsley, cilantro, dried rose petals, sumac, lime, pomegranate and honey. Cinnamon, cardamom and other sweet spices weave their way through savory and sweet dishes. Ms. Duguid’s discoveries on these intrepid travels are shared in stories and pictures, along with an abundance of recipes.”
—The New York Times, The Best Cookbooks of Fall 2016

“Gorgeous and useful.”
—The Seattle Times

“Naomi Duguid’s cookbooks belong to their own genre—they are unique travel journals studded with history, geography and ethnography, along with fabulous photos of the people she meets and the places she goes. Then, of course, there are the intriguing, detailed recipes she collects. It’s more than armchair travel—you become immersed in the culinary culture of a faraway part of the world. Taste of Persia, Duguid’s latest, is a glorious trip through these five countries that once were part of the Persian empire.”
—BookPage, Top Pick in Cookbooks

“This book is not singularly about ‘Persian food.’ It is about a culinary region and culture, about transcending borders, about contextualizing a rich, edible heritage. . . . Though Duguid tested recipes over and over again in her kitchen in Toronto, the recipes rightfully belong to the women she met during her travels. The book celebrates unsung food artists who have shared their cooking practices and recipes through centuries of oral tradition and culture. . . . Sometimes it takes an outsider who has a different perspective, to look at a region with appreciation and talk about the historical ties and culinary links.”
—The Globe Mail