Ballads of the North, Medieval to Modern (Festschriften) (Hardcover) 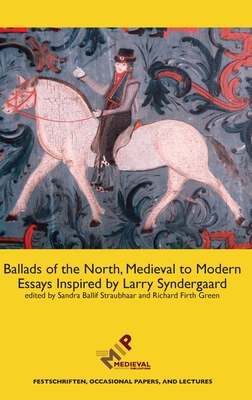 Ballads of the North, Medieval to Modern (Festschriften) (Hardcover)

By No Contributor (Other)


Not On Our Shelves—Ships in 1-5 Days
This volume is intended as a belated but heartfelt thank-you and Gedenkschrift to the late Larry Syndergaard (1936-2015), long-time professor of English at Western Michigan University and Fellow of the Kommission f r Volksdichtung (International Ballad Commission). Larry's contributions down the decades to ballad studies--particularly Scandinavian and Anglophone--included dozens of papers and articles, as well as his supremely useful book, English Translations of the Scandinavian Medieval Ballads. As David Atkinson and Thomas A. McKean of the Kommission have written (May 2015): "Larry... was a sound scholar with a penetrating mind which he used to support, encourage and befriend others, rather than show off his own knowledge. He will be remembered for his contributions to international balladry, especially for providing a bridge between the English- and Scandinavian-language ballads." Larry's particular fascination with the vernacular ballads of the northern medieval world are reflected in this collection; topics here range from plot elements such as demonic whales, otherworldly antagonists, and mer-people to thematic issues of genre, religion and sexual mores. As a tribute to the global influence of Larry's scholarship and the broad academic interest in medieval ballads, the essays in this volume were contributed by twelve international scholars of narrative song based in Europe, North America and Australia.
Sandra Ballif Straubhaar, University of Texas at Austin, USA; Richard Firth Green, Ohio State University, Columbus, USA.