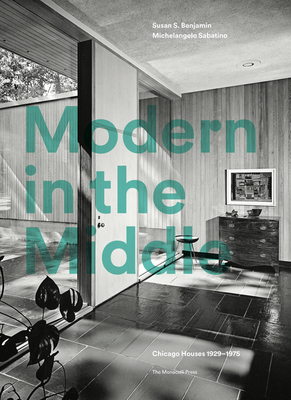 Famed as the birthplace of that icon of twentieth-century architecture, the skyscraper, Chicago also cultivated a more humble but no less consequential form of modernism--the private residence. Modern in the Middle: Chicago Houses 1929-75 explores the substantial yet overlooked role that Chicago and its suburbs played in the development of the modern single-family house in the twentieth century. In a city often associated with the outsize reputations of Frank Lloyd Wright and Ludwig Mies van der Rohe, the examples discussed in this generously illustrated book expand and enrich the story of the region's built environment.

Authors Susan Benjamin and Michelangelo Sabatino survey dozens of influential houses by architects whose contributions are ripe for reappraisal, such as Paul Schweikher, Harry Weese, Keck & Keck, and William Pereira. From the bold, early example of the "Battledeck House" by Henry Dubin (1930) to John Vinci and Lawrence Kenny's gem the Freeark House (1975), the generation-spanning residences discussed here reveal how these architects contended with climate and natural setting while negotiating the dominant influences of Wright and Mies. They also reveal how residential clients--typically middle-class professionals, progressive in their thinking--helped to trailblaze modern architecture in America. Though reflecting different approaches to site, space, structure, and materials, the examples in Modern in the Middle reveal an abundance of astonishing houses that have never been collected into one study--until now.
Michelangelo Sabatino directs the PhD program in architecture and is the inaugural John Vinci Distinguished Research Fellow at the Illinois Institute of Technology. As an architect, preservationist, and historian, his research broadly addresses intersections across culture, technology, and design in the built and natural environment. He has authored and coauthored numerous books including Pride in Modesty: Modernist Architecture and the Vernacular Tradition in Italy (2011) recipient of the Society of Architectural Historians’ Alice Davis Hitchcock Award, Canada: Modern Architectures in History (2016), Avant-Garde in the Cornfields: Architecture, Landscape, and Preservation in New Harmony (2019), and Making Houston Modern: The Life and Architecture of Howard Barnstone (2020).

Susan Benjamin is a noted historic preservationist and published architectural historian based in Chicago. Her office, Benjamin Historic Certifications, has initiated the landmarking of notable historic buildings of all periods, in Chicago as well as throughout Illinois. Benjamin lectures frequently on a wide variety of topics, from historic landscapes to Chicago's residential architecture of the nineteenth century to the present. She is coauthor, with architect Stuart Cohen, of two important books on historic residential architecture in Chicago: North Shore Chicago, Houses of the Lakefront Suburbs: 1890-1940 (Acanthus Press, 2004) and Great Houses of Chicago: 1871-1921 (Acanthus Press, 2008).
Winner of Docomomo US 2021 Modernism in America Award of Excellence

“Fans of mid-20th century modernism, especially as it took shape in the Midwest, will likely want to check out “Modern in the Middle: Chicago Houses 1929-1975” . . . the book explores how Chicago and its suburbs played a pivotal but overlooked role in developing the modern single-family house.”
—Blair Kamin, Chicago Tribune

“Of course, several Frank Lloyd Wright and Mies van der Rohe houses are featured . . . However, the book comes alive with less familiar gems. . . . In each case, the authors briefly delve into the history of the house, the architect, the client, and even the house’s current condition, making you want more.”
—Architectural Record

“This book is an impressive effort at bringing more attention to these designs of smaller scale but equal skill. . . . [T]his is a study that is overdue.”
—Interior Design

“[A] handsome coffee-table book of masterpieces by architects.”
—Chicago Magazine

“Featuring over fifty private residences designed by renowned and lesser-known architects, lush photographs, and definitive essays by its co-authors Susan Benjamin and Michelangelo Sabatino, Modern in the Middle: Chicago Houses 1929-1975 is the book you want to get lost in. . . ”
—Classic Chicago

“A new book that tells the stories behind a few dozen samples of the rich stock of 20th century modernist homes in Chicago and the suburbs.”
—Crain’s Chicago Business

“In Modern in the Middle: Chicago Houses 1929-1975, [Chicago-based architectural historians and preservationists] Susan Benjamin and Michelangelo Sabatino present a far broader consideration of high modernism in the Chicago area than has generally been acknowledged. Local aficionados will recognize some of the entries, but even the most provincial will find new work to inspire from more than four dozen projects discussed.”
—ARCHITECT

“Their lucid text, accompanied by handsome historic photographs, fills a significant gap in our understanding of mid-20th-century modernism. . . . In addition to broad introductory essays, the authors provide tightly focused studies of more than 50 houses. Among them: the Cahn House in north suburban Lake Forest, an extraordinary, crescent-shaped passive solar home by George Fred Keck. It’s one of many delightful finds in these pages.”
—Chicago Tribune

“Photos are in abundance . . . . The essays are excellent in providing context and making an argument for the appreciation and preservation of many houses in the book.”
—A Daily Dose of Architecture

“A first of its kind for the Chicago area.”
—Dennis Rodkin

"Modern in the Middle significantly expands our understanding of modern architecture in the Chicago area by bringing to light a number of lesser-known yet talented architects. The houses and interiors designed by IIT graduates like myself demonstrate that the Miesian legacy was more complex than it might appear at first sight."
—John Vinci, FAIA

"Modern in the Middle looks beyond Chicago’s iconic skyscrapers to show us that this city’s residential buildings have also been paradigmatic in shaping modern architecture. The book’s scope goes beyond just “midcentury” making the “Middle” a signifier that explores Chicago’s central place in the nation’s geography and the essential role of the American middle class in defining the idea of “modern housing.” Every piece of this carefully assembled volume is insightful and still resonant in our lives today."
—Gwendolyn Wright, Columbia GSAPP

"This rich and fascinating compendium places the modern houses in and around Chicago in historical and philosophical context. In addition to the descriptions not only of the houses and architects but also the crucial role of the clients, the accompanying original photographs and plans are important parts of the thorough documentation. There is much to be discovered here!"
—Cynthia Weese, FAIA

"How did we let ourselves forget so much remarkable architecture? Modern in the Middle reminds us that modern architecture has been more diverse and inventive than we seem to remember even in a fabled region such as Chicago and environs. This book is a long overdue corrective for our forgetfulness. May this book enrich our understanding of yesterday’s architecture and inform the architecture to come."
—Alan Hess, architect and historian

"This book transforms the way we view modern residential architecture in Chicago and goes far beyond the iconic Robie and Farnsworth houses, allowing us to discover a largely unknown body of work presented through a powerful collection of photographs."
—Tom Avermaete, Swiss Federal Institute of Technology, Zürich

“There’s nothing better than sitting down with a luxe coffee-table sized book and indulging in some eye-candy.”
—Advice Sisters

“The creation of the modern residence led the way for the modernism architecture movement to be more fully accepted by the masses, as seen here, with an abundance of astonishing homes that have never been collected in one study until now.”
—Society Texas

“It’s good to finally have Modern in the Middle. It provides an important insight into mid-20th century Chicago and its suburbs—and into the art of the region’s landscape. At last!”
—Third Coast Review

“With Modern in the Middle: Chicago Houses 1929–1975, authors Susan S. Benjamin and Michelangelo Sabatino shine a deserved spotlight on the ‘unique strain of modern residential architecture; that has influenced how and where we live today.”
—Azure