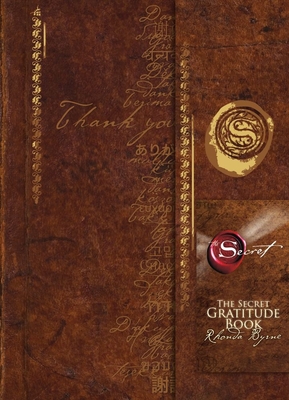 This is book number 8 in the The Secret Library series.

Show the universe how thankful you are for everything it has given—and lay the groundwork for even more gifts—with this companion to The Secret.

The Secret is an international phenomenon that has inspired millions of people to live extraordinary lives. Now The Secret Gratitude Book provides an incredibly powerful tool to live The Secret, and to bring joy and harmony to every aspect of your life. Filled with insights and wisdom from Rhonda Byrne, this beautiful journal offers a framework for practicing the power of gratitude each day, enabling you to attract every magnificent thing you want into your life.
Rhonda Byrne is the creator behind The Secret, a documentary film that swept the world in 2006, changing millions of lives and igniting a global movement. Later that same year, Rhonda’s book of The Secret was released. It has been translated into more than fifty languages and remains one of the longest-running bestsellers of all time. Rhonda has written four more bestselling books: The Power in 2010, The Magic in 2012, Hero in 2013, and The Greatest Secret in 2020.