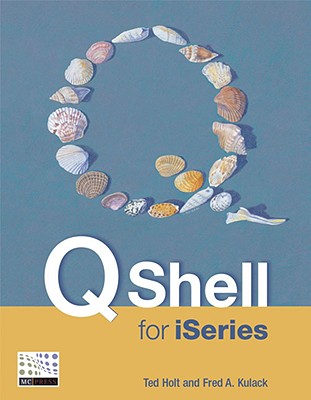 
Special Order—Subject to Availability
From the basics of programming in the Qshell on iSeries to complete coverage of previously undocumented topics, programmers will not only learn the Qshell more easily than they can with the Qshell manual from IBM, they will also learn practical applications of using the Qshell effectively. Written for users who are more comfortable with DDS, CL, and RPG as well as those using modern languages such as C and Java, this book allows those who are unfamiliar with Unix to easily learn this technology, which otherwise might be foreign to them. Although written specifically for iSeries programmers, the information gleaned here will be largely applicable to the shells for Linux and Unix, so programmers not familiar with those platforms will find those shells much easier to learn after learning Qshell.

Ted Holt has worked in the information industry since 1981, primarily with IBM midrange computers. His industry experience includes the fields of manufacturing, healthcare, education, retail, and wholesale. He is the author of The MC Press Desktop Encyclopedia of Tips, Techniques, and Programming Practices for iSeries and AS/400, Complete CL, and Open Query File Magic. He lives in Corinth, Mississippi. Fred Kulack is an IBM developer who has implemented portions of many of the UNIX type API components on the iSeries. He has worked on Java and J2EE technologies like JDBC, the Java Transaction API, and WebSphere and was part of the team that developed the Qshell interpreter. He now helps large IBM business partners with architecture, porting, and performance related to their C, C++, Java, and J2EE applications. He lives in Rochester, Minnesota.