Socialism or Barbarism: From the American Century to the Crossroads (Paperback) 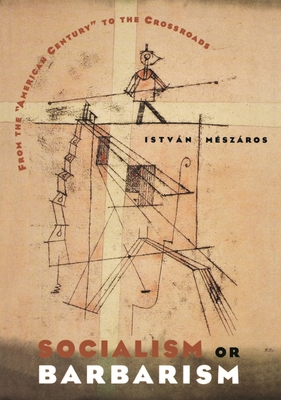 Socialism or Barbarism: From the American Century to the Crossroads (Paperback)

Istv n Mesz ros's bold new study analyzes the historical choices facing us at the outset of the new millennium. Drawing on the theoretical arguments of his monumental and widely-acclaimed work, Beyond Capital, M sz ros shows that the economic boom of the 1990s was built not only on the foundation of new, digital technologies but also on a new social and ethical basis. In the global quest for profit, capitalism has abandoned its claims to serve a larger historical cause. Even in the wealthiest capitalist economies, unemployment has become structural and conditions of life have become more onerous for most of the population.
The failure of capitalism's historical mission is most evident in the end of the project of Third World modernization so essential to the claims of U.S. global power to represent an advance on old-style imperialism. M szaros develops an illuminating analysis of the roots and tensions of the politics of U.S. global power from the time of Roosevelt's Open Door policy to the present. Against this historical background, he examines the dilemmas which will be faced in the making of U.S. foreign policy towards Chinathe largest and most rapidly-expanding national market in the global economy and the newly-emerging rival to U.S. global dominance. M sz ros shows how this process is rooted in the historical logic of contemporary capitalism, and is neither accidental nor temporary. In the process, he gives new meaning and urgency to the alternatives posed by Rosa Luxemburg at the beginning of the 20th century: socialism or barbarism.
M sz ros also explores the conditions for the emergence of a radical alternative to capitalism, arguing that a critical re-examination of earlier movements and struggles is an essential task for the emergence of such an alternative. As a sequel to his essay, an extended interview deals with more reflectively with the main categories underlying his analysis and relates it to developments within the broader analysis of modern society.