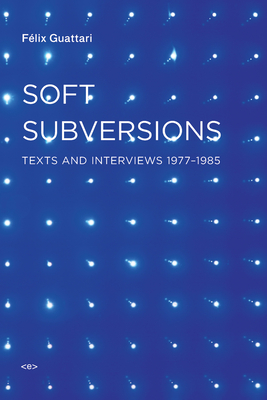 
Special Order—Subject to Availability
A new, expanded, and reorganized edition of a collection of texts that present a fuller scope to Guattari's thinking from 1977 to 1985.

This new edition of Soft Subversions expands, reorganizes, and develops the original 1996 publication, offering a carefully organized arrangement of essays, interviews, and short texts that present a fuller scope to Guattari's thinking from 1977 to 1985. This period encompasses what Guattari himself called the “Winter Years” of the early 1980s—the ascent of the Right, the spread of environmental catastrophe, the rise of a disillusioned youth with diminished prospects for career and future, and the establishment of a postmodernist ideology that offered solutions toward adaptation rather than change—a period with discernible echoes twenty years later. Following Semiotext(e)'s release last season of the new, expanded edition of Chaosophy: Texts and Interviews 1972–1977, this book makes Guattari's central ideas and concepts fully available in the format that had been best suited to Guattari's temperament: the guerrilla-styled intervention of the short essay and interactive dialogue. This edition includes such previously unpublished, substantive texts as “Institutional Intervention” and “About Schools,” along with new translations of “War, Crisis, or Life” and “The Nuclear State,” interviews and essays on a range of topics including adolescence and Italy, dream analysis and schizo-analysis, Marcel Proust and Jimmy Carter, as well as invaluable autobiographical documents such as “I Am an Idea-Thief” and “So What.”

Félix Guattari (1930–1992), post-'68 French psychoanalyst and philosopher, is the author of Anti-Oedipus (with Gilles Deleuze), and a number of books published by Semiotext(e), including The Anti-Oedipus Papers, Chaosophy, and Soft Subversions.

Sylvère Lotringer is Jean Baudrillard Chair at the European Graduate School, Switzerland, and Professor Emeritus of French literature and philosophy at Columbia University.