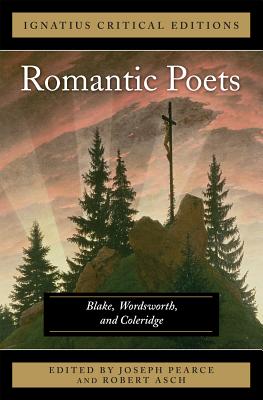 The word “romantic” has so many varied meanings that C. S. Lewis quipped it should be deleted from our vocabulary. Yet, from the perspective of English literature, “romantic” is associated, first and foremost, with the poetry of Romanticism, the movement that accentuated the aesthetic value of emotion, human experience, and the majesty of nature. In this volume the finest works of the first generation of Romantic Poets—Blake, Wordsworth, and Coleridge—are assembled in an accessible and yet scholarly manner, together with a selection of contemporary criticism by tradition-oriented experts, in order to introduce these poets to a new generation of readers.

Joseph Pearce, director of the Aquinas Center for Faith and Culture at Aquinas College in Nashville, is the author of three books on Shakespeare, all published by Ignatius Press, and is the editor of the Ignatius Critical Editions of Romeo and Juliet, The Merchant of Venice, Julius Caesar, Hamlet, King Lear, and Macbeth. He is editor of the St. Austin Review (or StAR), a magazine of Christian culture and tradition published by St. Augustine’s Press.

Robert Asch is an English literary critic, specializing in the nineteenth and early twentieth centuries. Educated in London and Toronto, he spent most of the 1990s in Central Europe and presently lives in Spain with his wife and children. He is a cofounder and a coeditor of the St. Austin Review (or StAR), and editor of the St. Austin Press. He is currently translating Léon Bloy and preparing an annotated edition of Lionel Johnson’s writings.