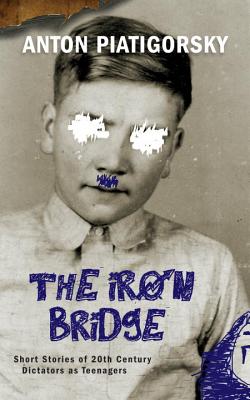 
Special Order—Subject to Availability
The Iron Bridge delivers an inspired inquiry into the early lives of the 20th century's most notorious tyrants. Anton Piatigorsky pushes at the boundaries of the unexpected as he breathes fictionalized life into the adolescents who would grow up to become the most brutal dictators the world has ever known. We discover a teenaged Mao Tse-Tung refusing an arranged marriage; Idi Amin cooking for the British Army; Stalin living in a seminary; and a melodramatic young Adolf Hitler dreaming of vast architectural achievements. Pol Pot and Rafael Trujillo are also subjects of separate stories. Piatigorsky explores moments that are nothing more than vague incidents in the biographies of these men, expanding mere footnotes into entire realities. The Iron Bridge, completely imagined yet captivatingly real, captures those crucial instants in time that may well have helped to deliver some of the most infamous leaders in history.
Anton Piatigorsky is a native of Washington, DC and now lives in Toronto. He has twice won the Dora Mavor Moore Award. Eternal Hydra, commissioned by the Stratford Festival, was called "one of the best Canadian plays of the past decade" by NOW magazine. The chamber opera, Airline Icarus, for which he wrote the libretto, won the Italian Primo Fedora Award in 2011. His most recent play, Breath In Between, debuted in August, 2012.

“To fictionalize and dramatize scenes from the early lives of history’s most infamous tyrants and practitioners of genocide is a unique and boldly challenging premise, and Piatigorsky succeeds against all odds. These complex and fascinating portraits illuminate while offering no excuses, no justification for crimes later committed. That these monsters-to-be are given such convincing humanity is a testament to Piatigorsky’s delicate craft, his patience and subtle creativity with the historical material at hand, and insight into the darkest possibilities of the human mind.” -- Danuta Gleed Literary Award Runner-Up Citation

"Through smart dialogue and revealing internal monologue, (Piatigorsky) brings to life the teenage years of Adolf Hitler, Josef Stalin, and Idi Amin, among others. . . . Piatigorsky’s experience as a playwright comes through in quick and entertaining dialogue that feels true to the varied time periods and sustains momentum through each long story. When the young Adi Hitler defensively says, 'It is a terrible mistake to judge an artist by the same standard as one would judge an artisan,' the comment is not just true to history, but revealing of a historical monster’s human side." -- Publishers Weekly

"The dictators, whose youth is the subject of this remarkable collection of short stories, were responsible for millions of deaths. But 'the child is father of the man,' and we know precious little psychobiographically about the forces that shaped and impelled them on their murderous course.  I am bedazzled by the creative imagination of the author whose compelling portraits convincingly and vividly fill in the relative void in the backgrounds of these authors of dark chapters in 20th century history." --  Jerrold Post, Director of the Political Psychology program, the George Washington University, author of Leaders and their Followers in a Dangerous World


"An astounding collection of intricate and rigorous character studies. The Iron Bridge bravely takes us deep into the nuanced, damaged psyches of men we would prefer to think of as monsters. Thrilling, brazen, brilliant, and deeply felt. The most compelling stories I've read in years." -- Sarah Polley, writer-director, Away from Her and Stories We Tell

"Anton Piatigorsky has found a rich gothic seam in 20th-century dictatorship, and, in six subtle and learned tales, sets the genre upon the weird adolescences of Idi Amin, Pol Pot, Mao, Stalin, Rafael Trujillo and Hitler . . . The Iron Bridgeis such a rich text that each story demands essays and dissertations in response. . . . Piatigorsky solves historical fiction's dilemmas with enviable skill and originality." -- The National Post

"Piatigorsky manages to present this sextet of future tyrants . . . as deeply flawed people and not just stereotypes. He humanizes, but doesn't glamorize, them. These stories, which all seem plausible, provide us with some real insight into the protagonists' manipulative minds, thus providing perspective into their adult actions as murderous psycopaths. 'The child is father of the man,' the poet William Wordsworth once wrote. The stories in this collection show it will be so." -- Winnipeg Free Press