Solemn Reverence: The Separation of Church and State in American Life (Truth to Power) (Paperback) 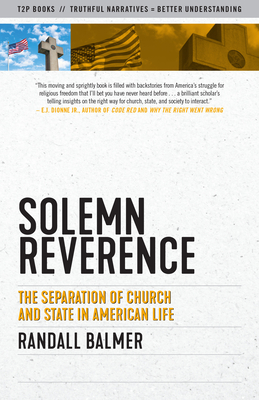 Solemn Reverence: The Separation of Church and State in American Life (Truth to Power) (Paperback)


Special Order—Subject to Availability
"A slender but thoroughly argued case for reinforcing the wall between church and state. . . A stern warning that those who push for the intrusion of religion into public life do so at the peril of both." -- Kirkus Reviews

The First Amendment to the US Constitution codified the principle that the government should play no role in favoring or supporting any religion, while allowing free exercise of all religions (including unbelief). More than two centuries later, the results from this experiment are overwhelming: The separation of church and state has shielded the government from religious factionalism, and the United States boasts a diverse religious culture unmatched anywhere in the world. In Solemn Reverence, Randall Balmer, one of the premier historians of religion in America, reviews both the history of the separation of church and state as well as the various attempts to undermine that wall of separation. Despite the fact that the First Amendment and the separation of church and state has served the nation remarkably well, he argues, its future is by no means assured.
Randall Balmer (Ph.D., Princeton University), a prize-winning historian, Emmy Award nominee and ordained Episcopal priest, is the John Phillips Professor in Religion at Dartmouth College. He was professor of American religious history at Columbia University for twenty-seven years, and he has been a visiting professor at Princeton, Yale, Drew, Emory, and Northwestern universities and in the Columbia University Graduate School of Journalism. He is the author of more than a dozen books, including Evangelicalism in America and Redeemer: The Life of Jimmy Carter. Mine Eyes Have Seen the Glory: A Journey into the Evangelical Subculture in America, now in its fifth edition, was made into a three-part series for PBS. He is writing and will host his third PBS documentary, a history of the Orthodox Church in Alaska. His commentaries about religion in America appear in newspapers across the country.
"Who needs this book? Pastors, professors, and all those who want to preserve one of the great distinctions of America."
--Scot McNight, in Christianity Today

"Balmer puts his skill as a historian on display as he makes well-resourced arguments, but he also excels here as a storyteller."
--Los Angeles Review of Books

“A thoroughly argued case for reinforcing the wall between church and state. . . A stern warning that those who push for the intrusion of religion into public life do so at the peril of both.”
--Kirkus Reviews

“Weaving his way through a history embracing the last four centuries, Balmer insightfully and creatively narrates the contested nature of disestablishment.”
--Journal of Church & State

"This moving and sprightly book is filled with backstories from America's struggle for religious freedom that I'll bet you have never heard before . . . a brilliant scholar's telling insights on the right way for church, state and society to interact."
--E.J. Dionne Jr., author of Code Red and Why the Right Went Wrong

"This insightful and timely study highlights significant ideas and events related to the separation of church and state in the US from the colonial era to the present. Amid relentless debates and frequent misunderstandings on the subject then and now, Solemn Reverence sets the historical record straight."
--Bill J. Leonard, Dunn Professor of Baptist Studies and Church History Emeritus at Wake Forest University

"This truth-telling book is the most succinct account now available of the history of government's relation to religion in the United States. If you must read only one book on this exceptionally important topic, this new work by the distinguished historian of American religion, Randall Balmer is the one to read."
--David A. Hollinger, University of California, Berkeley, and author of After Cloven Tongues of Fire

"Solemn Reverence is what we need right now: an antidote to the persistent threat of Christian Nationalism. Randall Balmer gives us an accessible and timely reminder of our country's powerful, if far from perfect, religious liberty history. It is a reminder of the wisdom and success of the separation of church and state."
--Holly Hollman, general counsel at BJC (Baptist Joint Committee for Religious Liberty)

"In a concise and wonderfully clear historical review of important episodes intended to defend the principle of church-state separation, Randall Balmer has provided religious Americans with a powerful reminder of their stake in the matter. The Baptist minister Roger Williams, long before the writing of the Constitution, warned churches not to get involved in the 'wilderness' of worldly politics. American Baptists remained staunch champions of church-state separation until the end of the twentieth century. What they have risked in forgetting Williams' warnings is only now becoming clear."
--R. Laurence Moore, author of Religious Outsiders and the Making of Americans