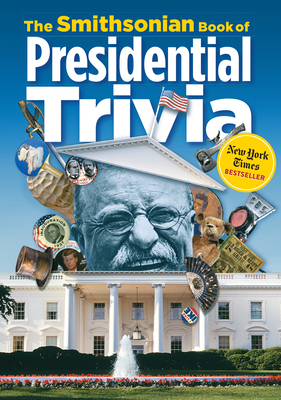 
Not On Our Shelves—Ships in 1-5 Days
Which president holds the record for the most vetoes? Which president had the largest shoe size? Who was the only president to serve in both World War I and World War II? Who was the tallest president? These questions and many, many more are answered in The Smithsonian Book of Presidential Trivia, which has been fully updated to 2021 to include trivia question and answers about every US president to date.

Divided into 11 chapters, The Smithsonian Book of Presidential Trivia looks at every aspect of our heads of state and presidential history: Citizens, Officers, Heroes, and Saviors; Stumping: From Front Porch to Facebook; The Pledge and the Parties; Inside the Oval Office; The Perpetual Podium; Home, Hotel, Parlor, Playground; First Families; Impeachment, Controversy, Shame; Assassination; Death, and National Mourning; Presidents in the Popular Imagination; and The Quotable President.

Many of the questions are accompanied with photographs of artifacts from the Smithsonian's collections. The Smithsonian Book of Presidential Trivia is sure to puzzle the trivia buff and presidential expert alike!
SMITHSONIAN INSTITUTION is the largest museum complex in the world, and its National Museum of American History has nearly five million visits annually. AMY PASTAN is a Washington, DC-based author, editor, and photo researcher. A former staff editor at the Smithsonian Institution, she currently writes and produces books for both adults and children.
FULLY UPDATED TO 2021

While many adults know Richard Nixon’s nickname (“Tricky Dick”) and the toy named after Theodore Roosevelt (the teddy bear), here students are offered much more, from the mundane (which president had the largest shoe size) to the more important (how many presidents have died while serving in office). With well-organized chapter headings (“Assassination, Death and National Mourning,” “Stumping,” “Home, Hotel, Parlor and Playground”), there are few aspects of the presidency overlooked–from illegitimate children and other controversies to spouses, pets, and even Facebook campaigns. A smattering of black-and-white photos lends accuracy and interest, allowing history buffs a peek at some of the Smithsonian’s presidential artifacts, including campaign buttons, clothing, medallions, and paper ephemera. While the institution is a reputable source of information, there are a few subtleties that could be debated in some of the answers listed. For example, one question asks, “Which president was accused of fathering an illegitimate child?” The answer listed is Grover Cleveland, and while it is is true that he has been accused, Thomas Jefferson has been too (although those indiscretions have been verified). Such potential oversights notwithstanding, this excellent introduction will interest even reluctant readers in these men by providing historic and often entertaining insights. It’s a great launching pad to a unit on the presidents.–Sharon Verbeten, All Write Creative Services, De Pere, WI

"You’re not likely to find a better source for fascinating and little-known details about U.S. presidents." The Star-Ledger

“The Smithsonian Book of Presidential Trivia” by Amy Pastan, which provides copious ammo to start or settle a barroom wager or dinner table debate. The breezy guide is way more fun than Google, Bing or Yahoo! and, as befits a tome from America’s storied museum complex—aka “the nation’s attic”—it is long on White House esoterica.” Annie Groer, The Washington Post
“The Smithsonian Book of Presidential Trivia… is chock full of data sure to stump even the most knowledgeable presidential buff.” Politico