Nation to Nation: Treaties Between the United States and American Indian Nations (Hardcover) 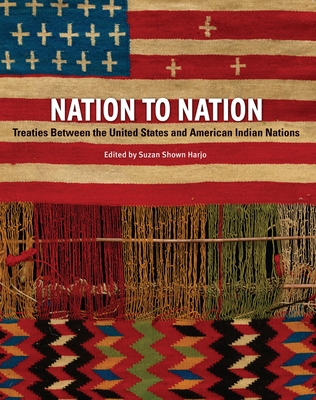 Nation to Nation: Treaties Between the United States and American Indian Nations (Hardcover)


Not On Our Shelves—Ships in 1-5 Days
Nation to Nation explores the promises, diplomacy, and betrayals involved in treaties and treaty making between the United States government and Native Nations. One side sought to own the riches of North America and the other struggled to hold on to traditional homelands and ways of life. The book reveals how the ideas of honor, fair dealings, good faith, rule of law, and peaceful relations between nations have been tested and challenged in historical and modern times. The book consistently demonstrates how and why centuries-old treaties remain living, relevant documents for both Natives and non-Natives in the 21st century.
SUZAN SHOWN HARJO (Cheyenne/Hodulgee Muscogee) is an advocate for American Indian rights as well as a poet, writer, lecturer, and curator. She is president of the Morning Star Institute, an American Indian rights advocacy group in Washington, DC.
BOOKLIST

This seminal volume, being published in conjunction with an exhibition at the Smithsonian’s National Museum of the American Indian, also commemorates the museum’s tenth anniversary. Those who contributed essays include Native and non-Native historians, legal scholars, and tribal activists, their sources culled from Native American material culture, tribal oral traditions, interviews, and historical documents. In assessing “what went wrong” with the 368 treaty relationships of “mutual respect” forged between 1777 and 1868, the authors cite numerous overreaches of power by the U.S. government, including the Doctrine of Discovery of 1823, whereby Indians lost the title to their lands, only retaining the right to occupy them; the “civilization regulations” which, beginning in 1883, criminalized everything traditional in Indian life; and the Plenary Power Doctrine of 1903, which stated that Congress could abrogate treaties without tribal consent. As the twentieth century unfolded, Indian nations “dusted off their treaties” and demanded that their original bilateral intent be fulfilled—leading to the restoration of water rights, fishing rights, and tribal civil jurisdiction. This landmark volume highlights this crucial and evolving process.  — Deborah Donovan

This impressive volume is lavishly illustrated with rare historical and stunning contemporary images and is about much more than just treaties. Encompassing subject matter as diverse as American Indian Civil Rights, alterations in traditional Native lifeways in order to accommodate treaty promises (even when the United States refused to honor them), expressions of Native sovereignty in language revitalization, traditional cultural preservation, and the promise of rights in the larger indigenous context of the United Nations, this book deserves a place on the bookshelves of the scholar’s scholar and is one of the most important works in Native Studies today.