Saving America's Amazon: The Threat to Our Nation's Most Biodiverse River System (Hardcover) 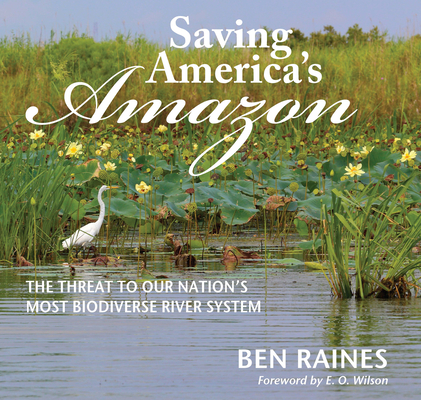 Saving America's Amazon: The Threat to Our Nation's Most Biodiverse River System (Hardcover)


Not On Our Shelves—Ships in 1-5 Days
Journalist, filmmaker, and environmental activist Ben Raines turns his attention to Alabama's Tensaw Delta in this gorgeously illustrated and meticulously researched book. Identified by Raines and others as America's own Amazon, the Tensaw Delta is the most biodiverse ecosystem in our nation. This special book celebrates this most significant of Alabama's waterways while also chronicling how it is increasingly at risk. Though almost no one knows it, the most diverse forests and aquatic systems in the nation lie in Alabama. Described as America's Amazon, Alabama has more species per square mile than any other state. Its rivers are home to more species of fish, crayfish, salamanders, mussels, snails, and turtles than any other aquatic system in North America. And the contest isn't even close. California, for instance, has nine species of crayfish, while Alabama has eighty-four. The Colorado River system, which drains seven Southwestern states, is home to 26 species of fish, while Alabama's rivers are home to 350 species. But the wild places of the state are also under siege. Alabama has suffered more aquatic extinctions than any other state. In fact, nearly half of all extinctions in the United States since the 1800s happened in Alabama, which has been logged, mined, and poisoned by a succession of industries. In this compelling portrait of the rough history of Alabama's rivers and the lands they flow through, Raines makes a case that more has been lost in Alabama than any other state thanks to the destructive hand of man. The version of Alabama that exists in the mind of the public--lynchings and fire hoses, cotton fields and steel mills--comes from things we've done to Alabama, and has for too long overshadowed the stunning natural splendor of the place. Saving America's Amazon highlights this other Alabama, a wild place of incredible diversity, of ancient gardens and modern edens. The ascendant view among scientists today is that Alabama's wild places should be treasured and protected as one of the richest and most diverse regions on the globe, an internationally important "biodiversity hotspot." But that is not what is happening on the ground in Alabama, which spends less on environmental protection than any other state. Instead, the constant stream of newly discovered species struggles to keep pace with the number of creatures being declared forever lost. The time of reckoning is here for the people of Alabama, who must decide whether their state will wear the crown for being the most diverse place on the continent, or the crown for the place with the most extinctions. One thing is certain, Alabama cannot lay claim to both crowns forever.
BEN RAINES is an environmental journalist and filmmaker. A longtime newspaper reporter, Raines has won more than two dozen awards for his coverage of environmental issues and natural wonders in Alabama and on the Gulf Coast, and coauthored several peer-reviewed papers published in scientific journals. He wrote and directed The Underwater Forest, an award-winning film about the exploration of a 70,000-year-old cypress forest found off the Alabama coast. Raines also wrote and produced the documentary America's Amazon, which has aired on PBS stations around the country and been distributed to public schools across Alabama. His underwater film work has appeared in documentaries on the Discovery Channel and National Geographic TV. Raines co-authored the book Heart of a Patriot with US Senator Max Cleland, which chronicled Cleland's journey from triple amputee to the Senate. Ben is a graduate of New York University's Tisch School of the Arts with a degree in filmmaking, and is a US Coast Guard-licensed captain, giving tours of the Mobile-Tensaw Delta and Alabama's barrier islands. He lives with his wife and son in Fairhope, Alabama.