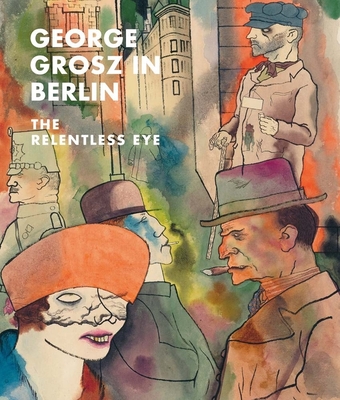 
On Our Shelves Now at:
A penetrating reevaluation of the period in which the German Expressionist George Grosz created his best-known, most searing satirical works

This overdue investigation of George Grosz’s (1893–1959) most compelling paintings, drawings, prints, and collages offers a reassessment of the celebrated German Expressionist during his years in Berlin—from his earliest artistic endeavors to the trenchant satirical images and searing depictions of moral decay between the World Wars for which he is known today. Menacing street scenes, rowdy cabarets, corrupt politicians, wounded soldiers, greedy war profiteers, and other symbols of Berlin’s interwar decline all met with the artist’s relentless gaze, which exposed the core social issues that eventually led to Germany’s extreme nationalist politics. Featuring masterpieces as well as rarely published works, this book provides further insight into the artist’s creative pinnacle, reached during this critical and ominous period in German history.

Staatsgalerie, Stuttgart
(November 18, 2022–February 26, 2023)
Sabine Rewald is curator emerita in the Department of Modern and Contemporary Art at The Metropolitan Museum of Art, New York. Ian Buruma is an author based in New York and was the editor of the New York Review of Books from 2017 to 2018.