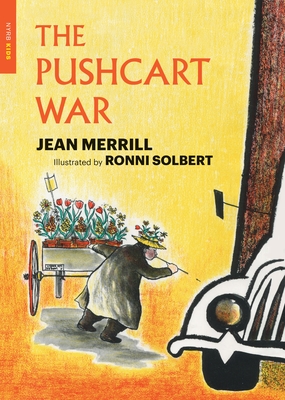 "The best book about politics ever written for children." —The Washington Post

DO YOU KNOW THE HISTORY OF THE PUSHCART WAR? THE REAL HISTORY?

It’s a story of how regular people banded together and, armed with  little more than their brains and good aim, defeated a mighty foe.

Not long ago the streets of New York City were smelly, smoggy, sooty, and loud. There were so many trucks making deliveries that it might take an hour for a car to travel a few blocks. People blamed the truck owners and the truck owners blamed the little wooden pushcarts that traveled the city selling everything from flowers to hot dogs. Behind closed doors the truck owners declared war on the pushcart peddlers. Carts were smashed from Chinatown to Chelsea. The peddlers didn’t have money or the mayor on their side, but that didn’t stop them from fighting back. They used pea shooters to blow tacks into the tires of trucks, they outwitted the police, and they marched right up to the grilles of those giant trucks and dared them to drive down their streets. Today, thanks to the ingenuity of the pushcart peddlers, the streets belong to the people—and to the pushcarts.

The Pushcart War was first published more than fifty years ago. It has inspired generations of children and been adapted for television, radio, and the stage around the world. It was included on School Library Journal’s list of One Hundred Books That Shaped the Twentieth Century, and its assertion that a committed group of men and women can prevail against a powerful force is as relevant in the twenty-first century as it was in 1964.

Jean Merrill (1923–2012) was born in Rochester, New York, and grew up on a dairy and apple farm near Lake Ontario. She received a master’s degree in English literature from Wellesley in 1945 and later studied folklore in India on a Fulbright fellowship. She worked for many years as an editor at Scholastic Magazine, Literary Cavalcade, and the publications department of Bank Street College before turning to writing full time. Her first book, Henry, the Hand-Painted Mouse, was published in 1951 and her last, The Girl Who Loved Caterpillars: A Twelfth-Century Tale from Japan, in 1992. In between she wrote some thirty books for young readers, including The Pushcart War (1964), The Elephant Who Liked to Smash Small Cars (1967; available from The New York Review Children’s Collection), and The Toothpaste Millionaire (1977).

Ronni Solbert (b. 1925) was born in Washington, D.C., and graduated from Vassar and the Cranbrook Academy of Art. As a Fullbright recipient she studied folk and tribal art in India. She has illustrated more than forty children’s books and written and illustrated three of her own. As a painter, sculptor, and photographer she has exhibited widely in the United States and abroad.

“The Pushcart War had a profound impact on me; when I was a kid I devoured it several times, and I’ve carried it deep inside me ever since. The book gave me a point of entrance–my first, I imagine–into the world of resistance to political and economic injustice and chicanery. It made opposition, even nonviolent civil disobedience, seem fun and right and necessary and heroic, and something even someone as powerless as a kid could and should undertake.” —Tony Kushner

“Finally, parents can get their hands on new copies of the best book about politics ever written for children. . . . This lively, lovely novel is an argument for staying hopeful about the possibility of bringing about change, even when you are going up against entrenched and powerful interests.” —Alyssa Rosenberg, The Washington Post

“A book about friendship and sticking together and sticking up for yourself, especially against The Man. Plus it’ll just make you feel all warm and fuzzy.” —Emily Temple, Flavorwire

“This is one of the great children’s classics. . . . Part of its charm is its old–New York quaintness, but the exciting story, set in the pressure-cooker of city traffic, is timeless.” —Sonja Bolle, Newsday

“Merrill’s story, full of unexpected reversals and understated witticisms, feels exceptionally modern. And by the end—after the two sides have hammered out a peaceful and deeply reasonable compromise—one can only hope that we’ll catch up to Merrill’s future one day.” —Adam Mansbach, NPR, You Must Read This

“This is satire on almost every conceivable aspect of modern urban life. . . .To all it should be funny, and to many it will have the disturbing ring of truth.” —School Library Journal, starred review

“There’s a children’s book that was of great help to me, The Pushcart War  by Jean Merrill. It is quite a wonderful description of how to run a campaign.” —Bill McKibben, The Boston Globe