What Makes You Not a Buddhist (Paperback) 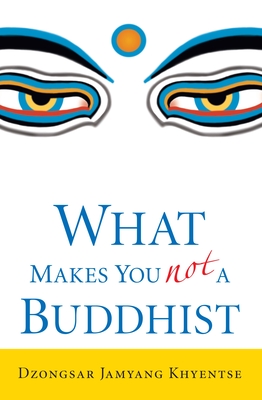 What Makes You Not a Buddhist (Paperback)


Not On Our Shelves—Ships in 1-5 Days
An innovative meditation master cuts through common misconceptions about Buddhism, revealing what it truly means to walk the path of the Buddha

So you think you’re a Buddhist? Think again. Tibetan Buddhist master Dzongsar Jamyang Khyentse, one of the most creative and innovative lamas teaching today, throws down the gauntlet to the Buddhist world, challenging common misconceptions, stereotypes, and fantasies.

In What Makes You Not a Buddhist, Khyentse reviews the four core truths of the tradition, using them as a lens through which readers can examine their everyday lives. With wit and irony, he urges readers to move beyond the superficial trappings of Buddhism—beyond the romance with beads, incense, or exotic robes—straight to the heart of what the Buddha taught. Khyentse’s provocative, non-traditional approach to Buddhism will resonate with students of all stripes and anyone eager to bring this ancient religious tradition into their twenty-first-century lives.

Dzongsar Jamyang Khyentse (Khyentse Norbu) is a Tibetan Buddhist lama who travels and teaches internationally and is also an award-winning filmmaker. He is the abbot of several monasteries in Asia and the spiritual director of meditation centers in Vancouver, San Francisco, Sydney, Hong Kong, and Taipei. He is also head of a Buddhist organization called Siddhartha’s Intent.

“A precise delineation of the key tenets that define Buddhism, versus what is superfluous, merely cultural, or not Buddhist at all. A good book to read if you’re deciding whether or not you’re a Buddhist, or just want to know what Buddhism really is.”—Lion’s Roar

"Here at last is a crisp new voice in Tibetan Buddhism. . . . There is much food for thought in this short book for Buddhist students and for anyone interested in the ongoing adaptation of traditional Eastern wisdom into postmodern Western settings."—Publishers Weekly

"A pleasant refresher or an excellent introduction to Buddhism, even for those who choose not to be Buddhists."—New Age Retailer