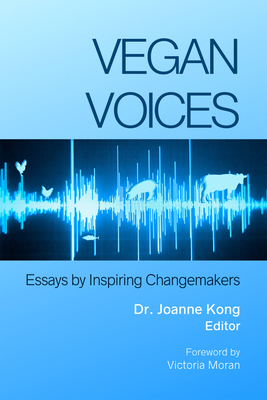 
In Stock—Click for Locations
A collection of informative, diverse, evocative, and inspiring essays from over 50 vegan activists, educators, artists, and changemakers on the whys and wherefores of the vegan diet and lifestyle.

Why should one go vegan? Is veganism the positive change the world needs? Vegan Voices: Essays by Inspiring Changemakers is a comprehensive collection of compelling testimonials about how our food choices are deeply connected to the pressing challenges and issues of our time. Areas covered include personal and global health; the devastation of animal agriculture to the environment; society’s collective loss of compassion and connection to our kindred animals; and the desire for a world of greater peace, harmony, and inclusivity. The book points to the need for a cultural and spiritual transformation in which we embrace the commonalities between all living beings as a source of positive change and healing.

Author and editor Joanne Kong has brought together the most inspiring and influential changemakers from around the world at the forefront of the vegan movement. They represent the great diversity of roles through which veganism has moved into the mainstream: activists, authors, speakers, athletes, entrepreneurs, community and event organizers, advocates for social and food justice, artists, filmmakers, medical and health professionals, environmental advocates, sanctuary owners, and more. The essays are organized into six sections: “Our Kindred Animals,” “Around the Globe,” “Activism,” “Body and Spirit,” “The Arts,” and “A New Future.”

Vegan Voices fills the needs of a wide range of readers, from those new to exploring the plant-based lifestyle to longtime vegans and advocates. Many essays are deeply personal reflections that attest to how veganism has the power to touch our lives on many levels. The book can be a source of continuing inspiration and motivation for those desiring to create a world of greater compassion and equality.
Dr. Joanne Kong has been recognized as one of the most compelling advocates for plant-sourced nutrition today. A frequent public speaker at universities, festivals, and conferences, her highly praised TEDx talk, “The Power of Plant-Based Eating,” is on numerous websites. She has toured extensively—in Italy, Spain, Germany, the Netherlands, Canada, and a three-week, ten-city tour of India—speaking on veganism. She is the author of If You’ve Ever Loved an Animal, Go Vegan (self-published), and is profiled in the book Legends of Change, about vegan women who are reshaping the world.