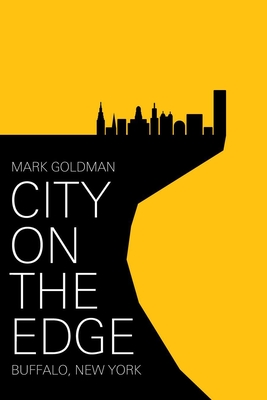 
Not On Our Shelves—Ships in 1-5 Days
BUFFALO, NEW YORK IS ENJOYING A RESURGENCE, AND HAS BECOME A RECOMMENDED TRAVEL DESTINATION. THIS BOOK TELLS THE STORY OF HOW IT GOT HERE.

In a sweeping narrative that speaks to the serious student of urban studies as well as the general reader, Mark Goldman tells the story of twentieth-century Buffalo, New York. Goldman covers all of the major developments:

• The rise and decline of the city’s downtown and ethnic neighborhoods
• The impact of racial change and suburbanization
• The role and function of the arts in the life of the community
• Urban politics, urban design, and city planning

While describing the changes that so drastically altered the form, function, and character of the city, Goldman, through detailed descriptions of special people and special places, gives a sense of intimacy and immediacy to these otherwise impersonal historical forces. City on the Edge unflinchingly documents and describes how Buffalo has been battered by the tides of history. But it also describes the unique characteristics that have encouraged an innovative cultural climate, including Buffalo’s dynamic survival instinct that continues to lead to a surprisingly and inspiringly high quality of community life. Finally, it offers a road map, which—if followed—could point the way to a new and exciting future for this long-troubled city.
Mark Goldman (Buffalo, NY), a successful entrepreneur who has played a major role in revitalizing the cultural life of downtown Buffalo, is the author of City on the Lake: The Challenge of Change in Buffalo, New York.
“Mark Goldman’s sprawling, ambitious new book chronicles the disheartening history of the City of Buffalo over the last century. It’s a familiar story that Goldman tells in rich—at times dense—detail while illuminating events from the past that are less well known today... At moments…Goldman’s prose fairly vibrates with his passion for the city. And the book is thoroughly researched… In writing City on the Edge, Goldman performs a service to his adopted city. The book is a worthwhile read for anyone who—like Goldman—cares deeply about Buffalo and its future.”

"The characters are real, their stories are compelling…Goldman offers a roadmap that could point the way to a solid future for this long-troubled city.”