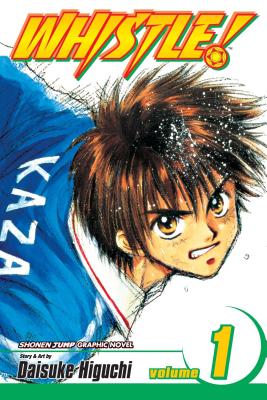 This is book number 1 in the Whistle! series.

Banned from his school's soccer team for being too short, Shô Kazamatsuri decides there's only one thing left to do: switch schools!

But even a change in scenery doesn't help the David Beckham wannabe. On campus, he is mistakenly introduced to everyone as a hotshot soccer player. When the truth is revealed, Shô drops out of school to practice on his own.

Alone, the spunky teenager must work twice as hard to make his dreams come true. He wants to play soccer so bad he's willing to hustle day and night to make it happen.

Packed with action, humor and teenage kicks, Whistle! is a must-read for dreamers (and soccer fans) of all ages!
Daisuke Higuchi's manga career began in 1992 when the artist was honored with third prize in the 43rd Osamu Tezuka Award. In that same year, Higuchi debuted as creator of a romantic action story titled Itaru. In 1998, Weekly Shonen Jump began serializing Whistle! Higuchi's realistic soccer manga became an instant hit with readers and eventually inspired an anime series, debuting on Japanese TV in May of 2002. The artist is currently working on yet-to-be-published new series.