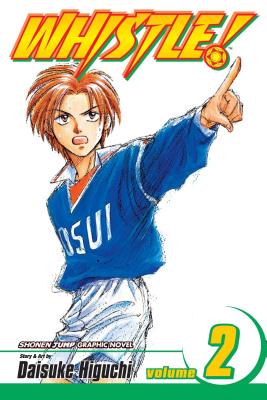 This is book number 2 in the Whistle! series.

Shô Kazamatsuri and his pals finally hit the magic number 11 and that means they're ready for high-kicking, goal-to-goal soccer action.

Unfortunately, Team Josui's first game is against the powerhouse private school,Musashinomori. Shô's crew may have boundless pluck and enthusiasm, but do they have the talent to compete with last season's reigning champions? Maybe not...but this year they have a secret weapon by the name of Tatsuya Mizuno.Not only is Tatsuya the best player on Josui's squad, he's also the son of the opposing team's coach. Soccer action and familial complications collide when father and son meet on opposite sides of the soccer field!
Daisuke Higuchi's manga career began in 1992 when the artist was honored with third prize in the 43rd Osamu Tezuka Award. In that same year, Higuchi debuted as creator of a romantic action story titled Itaru. In 1998, Weekly Shonen Jump began serializing Whistle! Higuchi's realistic soccer manga became an instant hit with readers and eventually inspired an anime series, debuting on Japanese TV in May of 2002. The artist is currently working on yet-to-be-published new series.