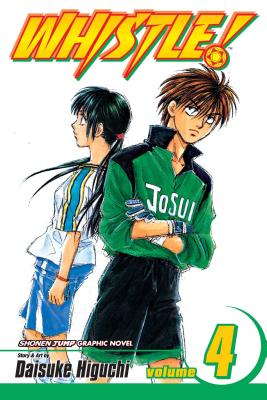 This is book number 4 in the Whistle! series.

Everybody has a dream, and for junior high school student Shô Kazamatsuri, that dream is simple: he wants to get off the bench and play soccer. An inspiration to everyone he meets,the indefatigable spark plug won't quit until he becomes the best soccer player he can be!

After playing an incredible and inspirational match against their cross-town rivals, the gang at Josui Junior High is now fielding queries from players who want to join their team. One of these hopefuls is Yuki Kojima, the team's pretty manager. She's not only cute and sweet but she's also an awesome soccer player, to boot.Slowly but surely, Shô is surrounding himself with a bunch of all-star athletes...now all he has to do is find a coach!
Daisuke Higuchi's manga career began in 1992 when the artist was honored with third prize in the 43rd Osamu Tezuka Award. In that same year, Higuchi debuted as creator of a romantic action story titled Itaru. In 1998, Weekly Shonen Jump began serializing Whistle! Higuchi's realistic soccer manga became an instant hit with readers and eventually inspired an anime series, debuting on Japanese TV in May of 2002. The artist is currently working on yet-to-be-published new series.