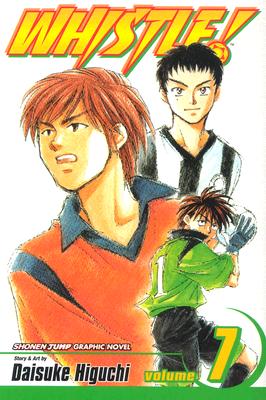 This is book number 7 in the Whistle! series.

Everybody has a dream, and for Shô Kazamatsuri, that dream is simple: he wants to be the best soccer player he can possibly be. An inspiration to everyone he meets, the indefatigable spark plug won't quit until he leads Josui Junior High to victory!

Though the season is still young, Shô has already learned the value of teamwork. He understands that an outstanding singular effort isn't always enough to ensure a winning record.

The rest of Josui's squad, however, is still grappling with the whole team unity concept. This flaw becomes amplified during a match against Iwa Tech, an opponent that takes pride in its impenetrable line of defense. It'll take the efforts of more than one or two players to get close to Tech's goal. It's time that Shô and his crew finally put their individual differences aside to form a unified team.
Daisuke Higuchi's manga career began in 1992 when the artist was honored with third prize in the 43rd Osamu Tezuka Award. In that same year, Higuchi debuted as creator of a romantic action story titled Itaru. In 1998, Weekly Shonen Jump began serializing Whistle! Higuchi's realistic soccer manga became an instant hit with readers and eventually inspired an anime series, debuting on Japanese TV in May of 2002. The artist is currently working on yet-to-be-published new series.