Chuck Norris Vs. Mr. T: 400 Facts About the Baddest Dudes in the History of Ever (Paperback) 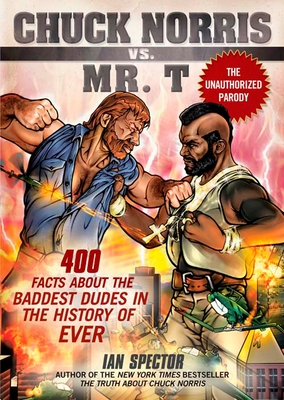 Chuck Norris Vs. Mr. T: 400 Facts About the Baddest Dudes in the History of Ever (Paperback)


Not On Our Shelves—Ships in 1-5 Days
In November 2007, Gotham Books unleashed The Truth about Chuck Norris upon the world and changed publishing forever. Containing 400 farcical facts about pop culture icon Chuck Norris, the book burned through thirteen printings, roundhouse kicked the New York Times bestseller list, and left readers delighted (and a little bit terrified)....

Now Ian Spector has returned to his voluminous vault to bring readers 200 new Chuck Norris facts alongside 200 facts about his longtime antagonist Mr. T, in a battle that pits foot against fist, beard against mohawk, and Delta Force against A-Team. Included in this fearsome tome are such startling observations as:

? There is nothing to fear but fear itself, and fear itself fears Chuck Norris.
? King Kong once challenged Godzilla to an arm-wrestling match. Mr. T won.
? The reason newborn babies cry is because they know they have just entered a world with Chuck Norris.
? The last man to make eye contact with Mr. T was Stevie Wonder.
? Chuck Norris is a man?s man?s man.
? Mr. T once beat a man to death with his own corpse.

A hilarious tribute to two of the greatest humans who have ever lived, Chuck Norris vs Mr. T is the one book that can finally reveal what happens when an irresistible force meets an immovable object.
Ian Spector launched the Web phenomenon “Chuck Norris Facts” in 2003 and is the New York Times bestselling author of The Truth About Chuck Norris and Chuck Norris vs. Mr. T. A recent graduate of Brown University, Spector lives on Long Island.