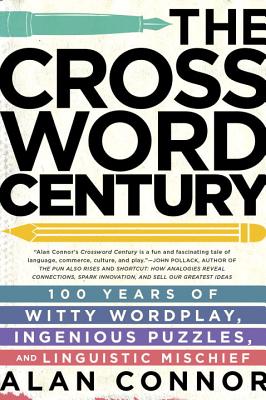 Since its debut in The New York World on December 21, 1913, the crossword puzzle has enjoyed a rich and surprisingly lively existence. Alan Connor, a comic writer known for his exploration of all things crossword in The Guardian, covers every twist and turn: from the 1920s, when crosswords were considered a menace to productive society; to World War II, when they were used to recruit code breakers; to their starring role in a 2008 episode of The Simpsons.

He also profiles the colorful characters who make up the interesting and bizarre subculture of crossword constructors and competitive solvers, including Will Shortz, the iconic New York Times puzzle editor who created a crafty crossword that appeared to predict the outcome of a presidential election, and the legions of competitive puzzle solvers who descend on a Connecticut hotel each year in an attempt to be crowned the American puzzle-solving champion.

At a time when the printed word is in decline, Connor marvels at the crossword’s seamless transition onto Kindles and iPads, keeping the puzzle one of America’s favorite pastimes. He also explores the way the human brain processes crosswords versus computers that are largely stumped by clues that require wordplay or a simple grasp of humor.

A fascinating examination of our most beloved linguistic amusement—and filled with tantalizing crosswords and clues embedded in the text—The Crossword Century is sure to attract the attention of the readers who made Word Freak and Just My Type bestsellers.
Alan Connor is an Oxford-educated writer, journalist, television producer, and academic. He lives in London where he writes a biweekly column for The Guardian on crosswords.
“Alan Connor's Crossword Century is a fun and fascinating tale of language, commerce, culture and play. Before reading this book, I didn't have a clue about the crossword's checkered past. Now I can see its extraordinary future, too.”

“If you love language and history and marvel at the genius of puzzles, codes, and game design, Alan Connor's deep dive into the crossword will keep you smiling and eagerly turning pages. Connor playfully explores the history of the beloved, gamified fever dream of sentences, definitions, letters, and words that is the modern crossword and reveals the dance that strange invention has enjoyed with its caretakers across history. If you adore words and wordplay, if you see language as an endless mutating jungle of puzzles and experimentation, you need this book in your life.”

— David McRaney, author of You Are Not so Smart and You Are Now Less Dumb

“[Connor offers] something to entertain even the most infrequent dabbler.”

“As elegantly sprinkled with surprising gems as the most satisfying crossword...thoroughly, consistently entertaining.”