Realm of Racket: Learn to Program, One Game at a Time! (Paperback) 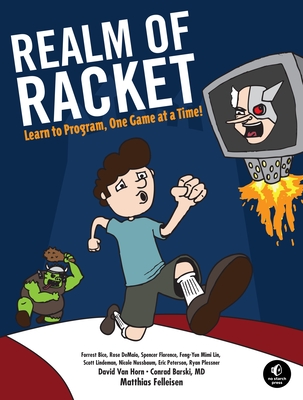 Realm of Racket: Learn to Program, One Game at a Time! (Paperback)


Backordered
Racket is a descendant of Lisp, a programming language renowned for its elegance, power, and challenging learning curve. But while Racket retains the functional goodness of Lisp, it was designed with beginning programmers in mind. Realm of Racket is your introduction to the Racket language.

In Realm of Racket, you'll learn to program by creating increasingly complex games. Your journey begins with the Guess My Number game and coverage of some basic Racket etiquette. Next you'll dig into syntax and semantics, lists, structures, and conditionals, and learn to work with recursion and the GUI as you build the Robot Snake game. After that it's on to lambda and mutant structs (and an Orc Battle), and fancy loops and the Dice of Doom. Finally, you'll explore laziness, AI, distributed games, and the Hungry Henry game.

As you progress through the games, chapter checkpoints and challenges help reinforce what you've learned. Offbeat comics keep things fun along the way.

As you travel through the Racket realm, you'll:
–Master the quirks of Racket's syntax and semantics
–Learn to write concise and elegant functional programs
–Create a graphical user interface using the 2htdp/image library
–Create a server to handle true multiplayer games

Realm of Racket is a lighthearted guide to some serious programming. Read it to see why Racketeers have so much fun!
Professor Matthias Felleisen is one of the original authors of the Racket language and a co-author of The Little Schemer and How to Design Programs. In 1995, Felleisen launched the TeachScheme! Project, reaching out to high schools with a radically novel computing curriculum. Felleisen is the 2012 recipient of the ACM Special Interest Group on Programming Languages (SIGPLAN) Lifetime Achievement Award as well as ACM's 2009 Karl V. Karlstrom Outstanding Educator Award. He is currently a Trustee Professor in the College of Computer and Information Science at Northeastern University in Boston, Massachusetts.
Conrad Barski has an M.D. from the University of Miami and nearly 20 years of programming experience. The author of Land of Lisp, Barski is also an avid cartoonist, having created the popular alien Lisp mascot and many graphical tutorials.
David Van Horn is a research professor at Northeastern University who has programmed in Racket and Scheme for over a decade.
Eight students of Northeastern University contributed to Realm of Racket: Forrest Bice, Rose DeMaio, Spencer Florence, Feng-Yun Mimi Lin, Scott Lindeman, Nicole Nussbaum, Eric Peterson, and Ryan Plessner.