The Manga Guide to Microprocessors (Paperback) 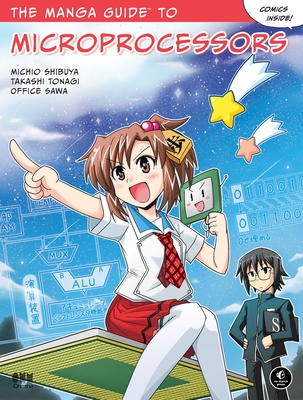 The Manga Guide to Microprocessors (Paperback)


Special Order—Subject to Availability
Ayumi is a world-class shogi (Japanese chess) player who can’t be beaten—that is, until she loses to a powerful computer called the Shooting Star. Ayumi vows to find out everything she can about her new nemesis. Lucky for her, Yuu Kano, the genius programmer behind the Shooting Star, is willing to teach her all about the inner workings of the microprocessor—the “brain” inside all computers, phones, and gadgets.


Follow along with Ayumi in The Manga Guide to Microprocessors and you’ll learn about:

-How the CPU processes information and makes decision
-How computers perform arithmetic operations and store information
-logic gates and how they’re used in integrated circuits
-the Key components of modern computers, including registers, GPUs, and RAM
-Assembly language and how it differs from high-level programming languages


Whether you’re a computer science student or just want to understand the power of microprocessors, you’ll find what you need to know in The Manga Guide to Microprocessors.
A 1971 graduate of Tokai University’s electrical engineering department, former nuclear magnetic resonance researcher Michio Shibuya has been a MOS product designer and developer for over 12 years. Shibuya has since pursued a career in IC design and is the author of The Manga Guide to Fourier Transforms, The Manga Guide to Semiconductors, and other books.
Office Sawa was established in 2006, specializing in advertisement and practical educational guides. They pride themselves in their sales promotion materials, reference books, illustrations, and manga-themed manuals.