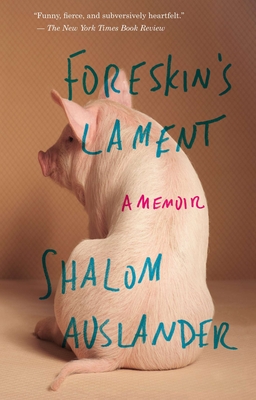 Shalom Auslander was raised with a terrified respect for God. Even as he grew up and was estranged from his community, his religion and its traditions, he could not find the path to a life where he didn’t struggle daily with the fear of God’s formidable wrath. Foreskin’s Lament reveals Auslander’s “painfully, cripplingly, incurably, miserably religious” youth in a strict, socially isolated Orthodox Jewish community, and recounts his rebellion and efforts to make a new life apart from it. His combination of unrelenting humor and anger renders a rich and fascinating portrait of a man grappling with his faith and family.
Shalom Auslander was raised in Monsey, New York. Nominated for the Koret Award for writers under thirty-five, he has published articles in Esquire, The New York Times Magazine, Tablet, The New Yorker, and has had stories aired on NPR's This American Life. Auslander is the author of the short story collection Beware of God and the acclaimed novel Hope: A Tragedy. He lives in New York City. To learn more about Shalom Auslander, please visit www.shalomauslander.com.
“Fierce, funny, and subversively heartfelt...With his middle finger pointed at the heavens and a hand held over his heart, Auslander gives us Foreskin’s Lament. Mazel tov to him. And God? Well, he’ll survive.”—New York Times Book Review

“Auslander writes like Philip Roth’s angry nephew... a scathing theological rant, a funny, oddly moving coming-of-age memoir, and an irreverent meditation on family, marriage, and cultural identity. God may be a bit irritated by this book, but I loved it.”—Tom Perrotta, author of Little Children and The Abstinence Teacher

“A laugh-out-loud quarrel with God.”—Newsweek

“A terrific book I was sad I read in so few sittings, because I wanted more.”
—San Francisco Chronicle

“A surprise and delight.”—Boston Globe