A Long Way Down (Paperback) 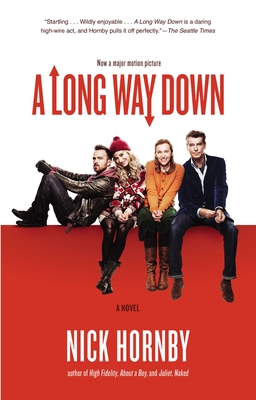 A Long Way Down (Paperback)


Special Order—Subject to Availability
A wise, affecting novel from the beloved, award-winning author of Funny Girl, High Fidelity, and About A Boy.

Meet Martin, JJ, Jess, and Maureen. Four people who come together on New Year's Eve: a former TV talk show host, a musician, a teenage girl, and a mother. Three are British, one is American. They encounter one another on the roof of Topper's House, a London destination famous as the last stop for those ready to end their lives.

In four distinct and riveting first-person voices, Nick Hornby tells a story of four individuals confronting the limits of choice, circumstance, and their own mortality. This is a tale of connections made and missed, punishing regrets, and the grace of second chances.

Intense, hilarious, provocative, and moving, A Long Way Down is a novel about suicide that is, surprisingly, full of life.
Nick Hornby is the author of six internationally bestselling novels (High Fidelity, About a Boy, How to Be Good, A Long Way Down, Slam and Juliet, Naked) and several works of non-fiction, including Fever Pitch. His screenplay for the film An Education was nominated for an Academy Award. He lives in Highbury, north London.
“One New Year’s Eve, four people with very different reasons but a common purpose find their way to the top of a fifteen-story building in London. None of them has calculated that, on a date humans favor for acts of significance, in a place known as a local suicide-jumpers’ favorite, they might encounter company. A Long Way Down is the story of what happens next, and of what doesn’t.”  —The New York Times Book Review

“It’s like The Breakfast Club rewritten by Beckett.… What makes the book work is Hornby’s refusal to give an inch to sentimentality or cheap inspirational guff.” —Time

"Wildly enjoyable. A daring high-wire act. It's serious literature...no, it's popular entertainment...no, it's both!" —Seattle Times