Legend of the Scarlet Blades (Hardcover) 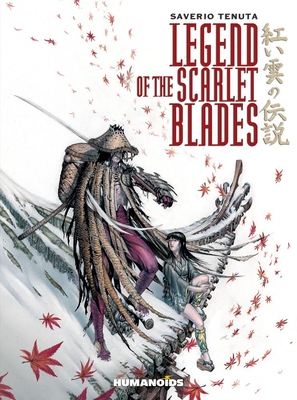 Legend of the Scarlet Blades (Hardcover)


Special Order—Subject to Availability
Raido, a young amnesic Ronin–a masterless Samurai–roams about in a quest for his memories. His first stop is the city that talks to the sky, the ultimate stronghold against the ice invading the land of the rising sun. There, he meets Meiki, a graceful puppeteer and storyteller of charms. "Legend of the Scarlet Blades," as painted by the tormented and airy style of Saverio Tenuta, is a series whose universe is inspired by feudal Japanese history and traditions, full of breathtaking settings and populated by a myriad of wondrous mythical beings.
Saverio Tenuta was born in Rome in 1969 and studied painting at the Academy of Fine Arts. He began his career as a graphic artist and later attended the International School of Comics in Rome, where he would also teach. In addition to contributing to the magazine Heavy Metal, he worked for DC Comics on JLA: Riddle of the Beast. In 2006, the first of his own series — which he wrote and illustrated — the Japanese medieval adventure The Legend of the Scarlet Blades was released in France by Humanoids. He expanded the Legend world in 2014 with Izuna, which Tenuta wrote while Carita Lupatelli took over the drawing duties. More series within the Legend universe are forthcoming.
"Legend of the Scarlet Blades is why we buy comic books. [...] It’s their sorrows and desires that keep us turning from one breathtaking page to the next. " - DoomRocket "A brilliant and emotional work, this is a book that everyone should know about." - StarburstMagazine.com "I was taken with it's beauty but the story itself is one that will leave a last impression. " - TheFrogQueen