Taoist Shaman: Practices from the Wheel of Life (Paperback) 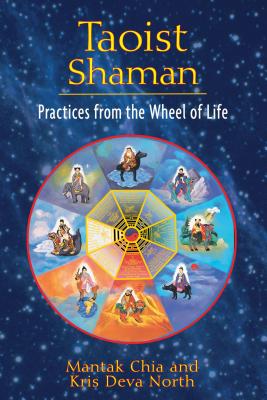 Taoist Shaman: Practices from the Wheel of Life (Paperback)

• Explains the principles of the Taoist Medicine Wheel, including the Five Elements, the animals of the Chinese zodiac, and the trigrams of the I Ching

Thousands of years ago the immortals known as the Shining Ones shipwrecked on the Chinese coast. Passing their shamanic practices--such as ecstatic flight and how to find power animals and spirit guides--on to the indigenous people, they also taught them the wisdom of the Medicine Wheel. From the Taoist Medicine Wheel came the principles of Yin and Yang, the Five Elements, the Eight Forces, the Chinese zodiac, and the I Ching. The Taoist Medicine Wheel can also be found at the foundation of traditional Chinese medicine and the esoteric sexual practices of Taoist Alchemy.

In the Taoist Shaman, Master Mantak Chia and Kris Deva North explain the shamanic principles of the Taoist Medicine Wheel, how it is oriented on the Five Elements rather than the Four Directions, how it relates to the twelve animals of the Chinese zodiac and the trigrams of the I Ching, and how it aligns with the Eight Forces of the Pakua. Through illustrated teaching stories, the authors show how the energetic principles of each of the Eight Forces are reflected in the Eight Immortals. Revealing the wheel’s application to sacred sexuality, they offer exercises from the “Wheel of Love” to strengthen and deepen relationships as well as providing a means to access the Tao of Ecstasy.
A student of several Taoist masters, Mantak Chia founded the Healing Tao System in North America in 1979 and developed it worldwide as European Tao Yoga and Universal Healing Tao. He has taught and certified tens of thousands of students and instructors from all over the world and tours the United States annually, giving workshops and lectures. He is the director of the Tao Garden Health Spa and the Universal Healing Tao training center in northern Thailand and is the author of 50 books, including Taoist Foreplay, Inner Smile, Cosmic Fusion, Sexual Reflexology, and the bestselling The Multi-Orgasmic Man.

Kris Deva North has been involved in Taoist practice since 1987. In 1993 he cofounded the Zen School of Shiatsu and London Tao Centre. He lives in London.
“Taoist Shamans is well worth considering for students of eastern philosophy and spirituality.”
— Midwest Book Review, May 2011

“...the book shows Mantak Chia, and his co-author, Kris Deva North, further extending one of the most promising aspects of the contemporary world...the growing popularity and influence of authors like these, who seek to outline a common way forward that draws on the wisdom of diverse experiences, is an area of promise and hope.”
— Reg Little, New Dawn Magazine, January 2012