Green Laurels: The Lives and Achievements of the Great Naturalists (Paperback) 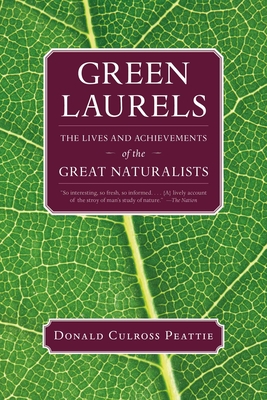 Green Laurels: The Lives and Achievements of the Great Naturalists (Paperback)


Special Order—Subject to Availability
In Green Laurels, Donald Culross Peattie combines his extensive knowledge of history's foremost naturalists with his personal observations about the subject to form what the New York Herald Tribune calls a delightful book...one would not wish to miss on any account. This piece is accurate and precise but according to Nation, there is not a line which is not dramatically vivid and entertaining. Peattie's enthusiasm and enlightened curiosity make Green Laurels appealing to readers of all backgrounds.
Donald Culross Peattie (1898-1964) was one of the most influential American nature writers of the 20th century. Peattie was born in Chicago and grew up in Smoky Mountains in North Carolina, which sparked his interest in the immense wonders of nature. He studied at the University of Chicago and Harvard University. After working for the U.S. Department of Agriculture, he decided to pursue a career as a writer. In 1925 he became a nature columnist for the Washington Star Newspaper and subsequently went on to pen more than twenty fiction and nonfiction books in the next five decades. Widely acclaimed and popular in his age, his legacy has been attributed as inspiring a modern age of nature writing.