The Dead Do Not Die: "Exterminate All the Brutes" and Terra Nullius (Paperback) 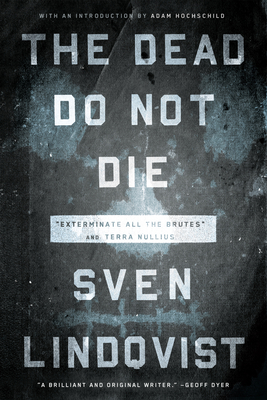 The Dead Do Not Die: "Exterminate All the Brutes" and Terra Nullius (Paperback)


Not On Our Shelves—Ships in 1-5 Days
Sven Lindqvist is one of our most original writers on race, colonialism, and genocide, and his signature approach--uniting travelogues with powerful acts of historical excavation--renders his books devastating and unforgettable. Now, for the first time, Lindqvist's most beloved works are available in one beautiful and affordable volume with a new introduction by Adam Hochschild. The Dead Do Not Die includes the full unabridged text of Exterminate All the Brutes, called a book of stunning range and near genius by David Levering Lewis. In this work, Lindqvist uses Joseph Conrad's Heart of Darkness as a point of departure for a haunting tour through the colonial past, retracing the steps of Europeans in Africa from the late eighteenth century onward and thus exposing the roots of genocide via his own journey through the Saharan desert. The full text of Terra Nullius is also included, for which Lindqvist traveled 7,000 miles through Australia in search of the lands the British had claimed as their own because it was inhabited by lower races, the native Aborigines--nearly nine-tenths of whom were annihilated by whites. The shocking story of how no man's land became the province of the white man was called the most original work on Australia and its treatment of Aboriginals I have ever read . . . marvelous by Phillip Knightley, author of Australia.

Sven Lindqvist was the author of more than thirty books, including Exterminate All the Brutes, The Skull Measurer's Mistake, A History of Bombing, Terra Nullius, and The Dead Do Not Die (all published by The New Press). A resident of Stockholm, he held a PhD in the history of literature from Stockholm University, an honorary doctorate from Uppsala University, and an honorary professorship from the Swedish government.