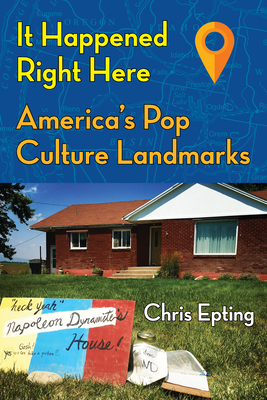 A Booksense 76 pick at the time, James Dean Died Here was covered by such major news outlets as NPR's "All Things Considered", USA Today, Los Angeles Times, and Publishers Weekly. Everyone from Ken Burns to The Sporting News to the New York Post expressed their love for Roadside Baseball, while Led Zeppelin Crashed Here was recommended for all public libraries by Library Journal and outlets from the Associated Press to Newsday encouraged any fan of rock and roll history to buy the book.

Now, in honor of the 20th anniversary of James Dean Died Here, Epting has produced It Happened Right Here America's Pop Culture Landmarks, which collects the best of the best from all of Epting's prior books, and then adds dozens and dozens of new sites, many of them based on the pop culture of the 21st century.

It Happened Right Here once again takes you on a journey across North America to the exact locations where the most significant events in American popular culture took place. It's a road map for pop culture sites, from Patty Hearst's bank to the garage where Apple Computer was born. Fully updated, the book includes such new entries as:

- The locations featured in such television series as Stranger Things, Breaking Bad, and Curb Your Enthusiasm

- The location of the opening freeway sequence from La La Land

- The locations featured in the cult film Napoleon Dynamite

Featuring hundreds of photographs, this fully illustrated, updated and revised encyclopedic look at the locations of the most famous and infamous pop culture events includes the fascinating history of over a thousand landmarks--as well as their exact location. With up-to-date information for the sites included in Epting's five original titles, plus dozens and dozens of new additions, It Happened Right Here is an amazing portrait of the bizarre, shocking, weird and wonderful moments that have come to define American popular culture.