Oskar and the Eight Blessings (Hardcover) 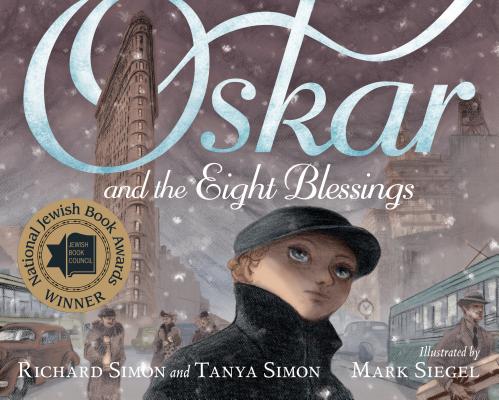 Oskar and the Eight Blessings (Hardcover)

Winner of the 2015 National Jewish Book Award for Children's Literature

A refugee seeking sanctuary from the horrors of Kristallnacht, Oskar arrives by ship in New York City with only a photograph and an address for an aunt he has never met. It is both the seventh day of Hanukkah and Christmas Eve, 1938. As Oskar walks the length of Manhattan, from the Battery to his new home in the north of the city, he passes experiences the city's many holiday sights, and encounters it various residents. Each offers Oskar a small act of kindness, welcoming him to the city and helping him on his way to a new life in the new world.

Tanya Simon (with her husband, Richard Simon) is a co-author of the children's novel Zora and Me, winner of a Coretta Scott King/John Steptoe Award for New Talent. She and her husband live in Westchester, New York.

Richard Simon and Tanya Simon are a husband-and-wife writing team. Richard is chair of the language department at an independent school and is co-author of a successful off-Broadway play. Tanya is co-author of the children's novel Zora and Me, winner of a Coretta Scott King/John Steptoe Award for New Talent. They live in Westchester, New York. Oskar and the Eight Blessings is their first picture book.

Mark Siegel is the author and illustrator of award winning picture books and graphic novels, including Long Night Moon, How to Read a Story, Oskar and the Eight Blessings, Tiny Dancer, and the New York Times bestselling Five Worlds series. He is also the founder of First Second books.

Winner of the 2015 National Jewish Book Award for Children's Literature

“A wonderful, heartwarming picture book for any library at any time of year.” —School Library Journal, starred review

“Siegel's paneled illustrations make anything seem possible. . . They glow. People used to say that the streets of America were paved with gold, and this book almost makes you believe it.” —Kirkus Reviews