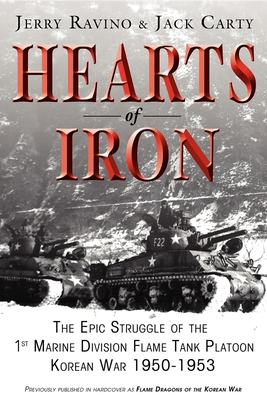 
Not On Our Shelves—Ships in 1-5 Days
HEARTS OF IRON is the epic true story of a little-known but significant part of the Korean War, told by the brave men of the Flame Platoon, First Tank Battalion, First Marine Division. This book shares the honest, personal accounts of combat, fear, death, and survival of these comrades of the Forgotten War, most of whom were not even trained to be Flame Tankers yet fought with weapons possessing some of the most lethal fire ability of any rolling armament in the war. Join Jerry Ravino and Jack Carty in their compelling narrative of their flame platoon as they courageously stood against the North Korean People's Army and the Chinese Communist Forces, etching another brilliant chapter in the Division's storied history.