Come On Shore and We Will Kill and Eat You All: A New Zealand Story (Paperback) 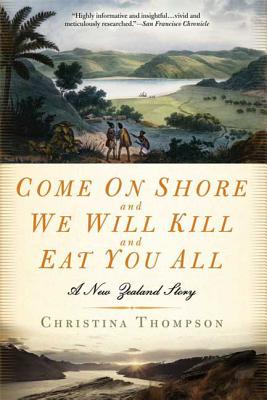 Come On Shore and We Will Kill and Eat You All: A New Zealand Story (Paperback)


Not On Our Shelves—Ships in 1-5 Days
(This book cannot be returned.)
In this involving, compassionate memoir, Christina Thompson tells the story of her romance and eventual marriage to a Maori man, interspersing it with a narrative history of the cultural collision between Westerners and the Maoris of New Zealand. Despite their significant differences, Thompson and her husband, Seven, share a similar sense of adventure and a willingness to depart from the customs of their families and forge a life together on their own. Thompson explores cultural displacement through the ages and the fascinating history of Europeans in the South Pacific, beginning with Abel Tasman's discovery of New Zealand in 1642. Yet at its core, this is the story of two people who meet, fall in love, and are forever changed.
Christina Thompson is the editor of Harvard Review. Her essays and articles have appeared in numerous journals, including American Scholar, the Journal of Pacific History, Australian Literary Studies, and in the 1999, 2000, and 2006 editions of Best Australian Essays. She lives near Boston with her family.

“A thing of beauty...enjoyable and descriptive. Thompson manages in her memoir to do what good fiction does [and] this book will certainly entertain those who want to learn more about Pacific island history.” —Tampa Tribune

“A multilayered, highly informative and insightful book that blends memoir, historical and travel narrative ... Thompson's prose is highly refined and dispassionately elegant, resulting in a Chekhovian clarity and restraint that in places possesses a poetic lucidity.” —San Francisco Chronicle

“[A] fine account. Her observations about the enduring effects of colonization [are] penetrating. She puts her vantage point of insider-outsider to good effect, tracing the genealogy of racial stereotypes and cutting through some of New Zealand's most cherished myths about itself.” —New York Times Book Review

“At heart a love story, /Come On Shore and We Will Kill and Eat You All/ is a moving examination of exploration ... and the way our travels into remote places on Earth can become travels into the remote places in our hearts and souls.” —Philadelphia Inquirer