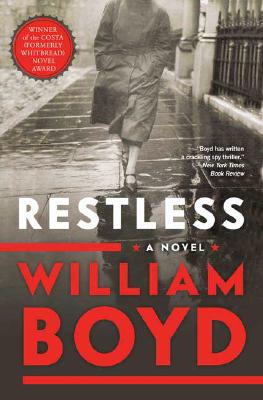 RESTLESS by William Boyd is now a two-part movie starring Charlotte Rampling, Michael Gambon, and Rufus Sewell, airing on the BBC in the UK and on the Sundance Channel in the U.S. in December, 2012.
It is Paris, 1939. Twenty-eight year old Eva Delectorskaya is at the funeral of her beloved younger brother. Standing among her family and friends she notices a stranger. Lucas Romer is a patrician looking Englishman with a secretive air and a persuasive manner. He also has a mysterious connection to Kolia, Eva's murdered brother. Romer recruits Eva and soon she is traveling to Scotland to be trained as a spy and work for his underground network. After a successful covert operation in Belgium, she is sent to New York City, where she is involved in manipulating the press in order to shift American public sentiment toward getting involved in WWII.
Three decades on and Eva has buried her dangerous history. She is now Sally Gilmartin, a respectable English widow, living in a picturesque Cotswold village. No one, not even her daughter Ruth, knows her real identity. But once a spy, always a spy. Sally has far too many secrets, and she has no one to trust. Before it is too late, she must confront the demons of her past. This time though she can't do it alone, she needs Ruth's help.

“Superbly written…one of the most smoothly readable novels of the year.” —Alan Cheuse, Chicago Tribune

“[An] espionage thriller and domestic drama by one of the very best prose stylists and storytellers in the English language.” —Atlantic Monthly

“The quality of Boyd's prose and the insight he brings to the story make Restless resonate. Told in his characteristically unobtrusive and elegant tone--[Boyd] explores the very idea of spying...” —Timothy Peters, San Francisco Chronicle