When Angels Wept: A What-If History of the Cuban Missile Crisis (Hardcover) 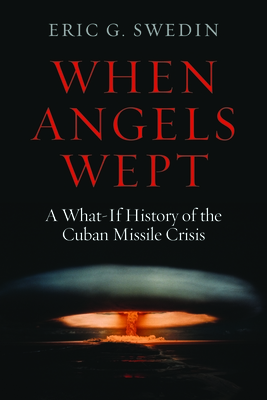 When Angels Wept: A What-If History of the Cuban Missile Crisis (Hardcover)


Not On Our Shelves—Ships in 1-5 Days
In 1961 at the Bay of Pigs, CIA-trained and -organized Cuban exiles aiming to overthrow Fidel Castro were soundly defeated. Most were taken prisoner by Cuban armed forces. Fearing another U.S. invasion of its new ally, the Soviet Union sneaked into Cuba strategic missiles tipped with nuclear warheads and Soviet troops armed with tactical nuclear weapons. However, a U-2 spy plane flight would soon find the Soviet missile sites, thus sparking the famous missile crisis. For thirteen terrifying days, the world watched nervously as the two superpowers moved toward escalation, holding the world’s fate in their hands. Finally, Nikita Khrushchev blinked. He agreed to withdraw the weapons from Cuba in return for John F. Kennedy’s pledge not to invade the island.

But what if it had not turned out this way? What if the U-2 flight had been delayed? If the confrontation had set off a nuclear war, what would have happened to the United States and Soviet Union in 1962? What kind of account would a historian have written in a world scarred by nuclear war?

Eric G. Swedin draws on research made available after the Soviet Union’s collapse to examine what could have happened. Top U.S. military officers all urged stronger action against Cuba than the naval blockade, including a bombing campaign and even a full-scale invasion. Unknown to the Americans, meanwhile, the Soviet Union had tactical nuclear weapons in Cuba and were prepared to use them.

The 1962 crisis had many possible outcomes. Positing an alternate history helps us better appreciate the dangers of that tense time. Such counterfactual speculation shows what the Cuban missile crisis could have wrought and how it was truly one of the most important moments of the twentieth century.
Eric G. Swedin is a professor in the History Department at Weber State University. His doctorate is in the history of science and technology. His publications include numerous articles, six history books, four science fiction novels, and a historical mystery novel. His "When Angels Wept: A What-If History of the Cuban Missile Crisis" earned the 2010 Sidewise Award for best alternate history novel. Eric lives with his family in a house built in 1881. His web site is http://www.swedin.org/.
“Recommended for any military or general library.”—California Bookwatch