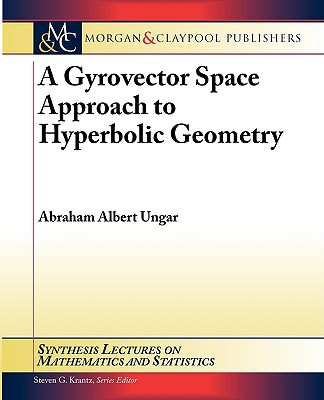 By Abraham A. Ungar


Special Order—Subject to Availability
The mere mention of hyperbolic geometry is enough to strike fear in the heart of the undergraduate mathematics and physics student. Some regard themselves as excluded from the profound insights of hyperbolic geometry so that this enormous portion of human achievement is a closed door to them. The mission of this book is to open that door by making the hyperbolic geometry of Bolyai and Lobachevsky, as well as the special relativity theory of Einstein that it regulates, accessible to a wider audience in terms of novel analogies that the modern and unknown share with the classical and familiar. These novel analogies that this book captures stem from Thomas gyration, which is the mathematical abstraction of the relativistic effect known as Thomas precession. Remarkably, the mere introduction of Thomas gyration turns Euclidean geometry into hyperbolic geometry, and reveals mystique analogies that the two geometries share. Accordingly, Thomas gyration gives rise to the prefix "gyro" that is extensively used in the gyrolanguage of this book, giving rise to terms like gyrocommutative and gyroassociative binary operations in gyrogroups, and gyrovectors in gyrovector spaces. Of particular importance is the introduction of gyrovectors into hyperbolic geometry, where they are equivalence classes that add according to the gyroparallelogram law in full analogy with vectors, which are equivalence classes that add according to the parallelogram law. A gyroparallelogram, in turn, is a gyroquadrilateral the two gyrodiagonals of which intersect at their gyromidpoints in full analogy with a parallelogram, which is a quadrilateral the two diagonals of which intersect at their midpoints.